5th Danish Film Festival Happening from October 9-13, 2019 at the Shang 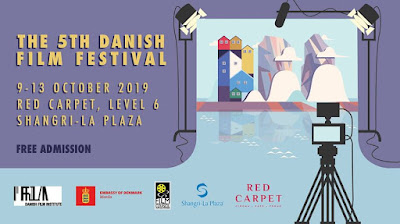 The Embassy of Denmark proudly announces the return of the 5th Danish Film Festival at the Red Carpet Theater of the Shangri-La Plaza Mall in Mandaluyong City from October 9 to 13, 2019. This year's line up of featured films focuses on the strength and variety of the Danish film culture.

For the opening night, the Filipino produced and directed psycho-thriller Nuuk will be the featured film. Wikipedia says that Nuuk (Greenlandic pronunciation: [nuːk], Danish: [ˈnu(ː)k]; Danish: Godthåb) is the capital and largest city of Greenland. It is the seat of government and the country's largest cultural and economic centre. The major cities closest to the capital are Iqaluit and St. John's in Canada and Reykjavík in Iceland.


Nuuk stars local A-lister celebrities Aga Muhlach and Alice Dixson. Nuuk is produced by Mavx Productions, and it is the first Filipino film to be shot in Greenland and was produced in cooperation with the Embassy of Denmark.

Other featured films to look forward to are "Ordet" [meaning "The Word"] by Carl Th. Dreyer who is regarded by filmmakers and critics as one of the greatest directors in cinema history. "A Fortunate Man" directed by Billie August, an Oascar winner and two times winner of The Golden Palms. Admission to the screenings are FREE but on a first come. first served basis.

Other featured films which will be screened are: "Darling","I Am William," The Charmer," Across The Waters," Ä Fortunate Man," Team Hurricane,"Circleen", The Day Will Come."

Screening Schedule are as follows: