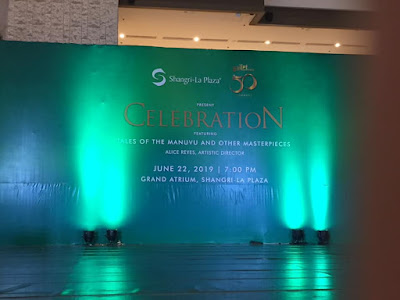 Shangri-La Plaza once again highlights on the Filipino talent, culture and artistry as it features Ballet Philippines at the Grand Atrium.

Mall goers were treated last June 22, 2019, Saturday, to Ballet Philippines’ world-class performance of excerpts from the Tales of the Manuvu, a rock opera ballet about the creation story of the Manobo tribe. The said special performance was choreographed by no less than National Artist for Dance and Ballet Philippines founder Alice Reyes, which debuted in 1977.

Its libretto was written by National Artist for Literature Bienvenido Lumbera based on the article written by historian and anthropologist E. Arsenio Manuel. Composer Dero Pedero (also known as Nonong Pedero) created the musical scoring along with the 70’s rock star Boy Camara and his rock band, The Afterbirth.

Tales of the Manuvu was restaged at the Cultural Center of the Philippines [CCP] in March to close the 49th season of the dance company with Reyes tapping today’s artists such as jazz/rock band Radioactive Sago Project for its live music and young singers like Sheila Valderama, Lorenz Martinez, Aicelle Santos and Lara Maigue.

Reyes’1972 piece, Bungkos Suite, was a crowd favorite at CELEBRATION. A collection of both traditional and popular Pinoy folk songs, it underscored the Filipino’s natural playfulness and sense of humor. Songs included in the suite are popular Kundiman, Dahil Sa Iyo, Chitchiritsit, Dandansoy and Telebong.


To give you a glimpse of what we had experienced in seeing the live performances of Ballet Philippines, here's an amateur video I too during the special performance:

Up and coming Ballet Philippines choreographer Ronelson Yadao also takes the limelight at Shang’s ballet showcase. Yadao completes CELEBRATION with Sama Sama. Commissioned by Reyes to add to the ballet company’s ever-evolving repertoire, the dance piece premiered in 2018 and is set to Maestro Ryan Cayabyab’s music. Sama Sama is an energetic showcase that stresses the power and artistry of its male members in the said dance company.


This was how they had performed Telebong:

Ballet Philippines will be bringing to the stage some of the most beloved masterworks in dance such as Swan Lake (August 30-September 8), Midsummer Night’s Dream (October 11-13) and Cinderella (December 6-15), Itimasu and Other Dances (February 21-23, 2020), and Rama, Hari (March 20-29, 2020).  All performance will be held at Tanghalang Nicanor Abelardo of the CCP Main Theater.