It seems that ramen is THE THING in the country right now. We found Ukokkei Japan by Menzo to be very good--we've got the first dibs on this newest restaurant to hit SM North. They have a large selection of ramen soups with rich broths from spicy to succulent. Appetizers were also very good. A great place to go on dates, family bonding and friendly meetings. In their SM Megamall branch, they seem to have created quite a cult following because there's always a line of people waiting, always a good indication that the food is worth waiting for. The best part? Prices were reasonable too, not to mention very affordable when compared to other restaurants that also feature ramen as their specialty.

Imagine getting yourself a bowl of comfort food for a steal price? What more can you ask for?

How long has it been since you last slurped a noodle? At this ramen store, I could soak in the aroma even when my head wasn’t bent over the bowl. Ukokkei Japan by Menzo is as authentic Japanese as you can get. They're very particular with their soup broth which they take pride in making. How strong did I want the broth? How rich with melted pork fat belly--a few isolated slicks coasting on top of the soup, or a layer thick of pork belly fat? Would I like chopped scallions or not? How about chashu, thin slices of marinated pork? No garlic, a pile of garlic, or something in between? I could even dash togarashi powder on it or chili oils. Do I want thin noodles or thick ones? Do I want more toppings? Oh yes, you can have these all at Ukokkei Japan by Menzo. You can have your soup made according to your liking. 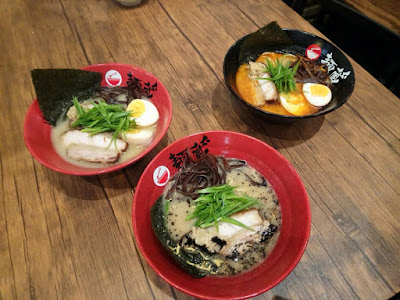 They have two types of noodles: regular one and the special pork ramen. The special one is of course a bit more expensive than the regular one because it has more toppings. For the special noodles, they've got Shiro Chashu Ramen, this is Chef Menzo's signature tonkotsu broth and it's made of rich pork bones that are cooked for 16 hours with sesame paste which brings out the flavor. They also have the Special Kuro Chashu Ramen. Menzo's broth made with sesame paste, sesame, and garlic. Its delicious smoky fragrant packs a punch with hints of umami. Last but not the least among the special noodles would be their Special AKA Chashu Ramen. Menzo's Kara tonkotsu  spicy chili soup topped with sesame paste, slices of melt-in-your-mouth pork belly and fresh toppings. 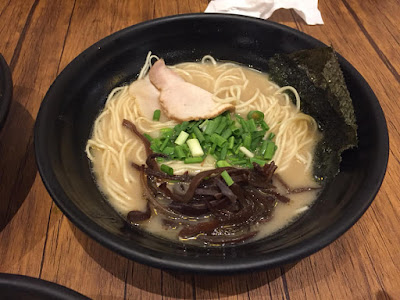 For special pork ramen, Ajitama is sold at Php300  while ramen are sold at Php280 for each comforting bowls of ramen. 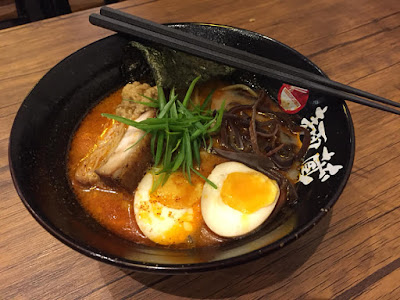 Should my noodles be soft on arrival, or firm because they’d get to keep cooking in the hot soup? Finally, did I want any of Ukokkei’s proprietary spice mixture dropped on top, and if so, how much? Would a few pinpricks of fire do, or should I make the broth so incendiary that I would have to reach for the tissues on the table beside me?

All these decisions would be pointless, of course, if the ramen were not very good. But It is GOOD, in fact, VERY GOOD. Whether you will prefer it to the majestically potent tonkotsu or the memorably savory one, it's up to you to decide. But it is rounded and substantial, moving across the mouth with the glide and density of extra light coffee. The flavor is very porky without any of the unnerving butcher-shop note that creeps into some tonkotsu. I was never served a bowl that was less than painfully hot, which is the ideal.

For the record, my preferences after a few rounds of experimentation are: broth of medium richness and strength; yes to scallions and the standard, a portion of cha-shu (it is less flavorful than at some other places, the meat less generous with jiggly streaks of fat); a smallish dab of garlic; and firm noodles, which are straight and skinny, like spaghetti.

The spicy blend has two kinds: the black colored one with loads of pepper on them and the AKA-with red colored paste that adds more than heat; after it sits in the soup for a while, the broth takes on a toasted flavor that sometimes reminded me of roasted peanuts. The amount I asked for varied based on how badly my head required banging that day. I stopped short of a full skull-shattering dose, but it’s reassuring to know I can get it when the need arises.

Ukokkei Japan by Menzo's ramen despite its rich broth, loaded toppings of cooked egg, squares of dried nori wrap, and wood ear mushrooms are surprisingly kept at very affordable price that even any normal Juan can afford. Of course, additional toppings have extra charges.

You may also opt for their flavorful Tsukemen (dipping noodles). They're good alternative to the usual ramen. 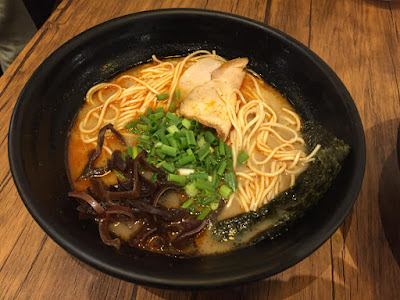 Those who, like me, enjoy semi-liquid yolks (runny eggs) in their ramen will not want the egg, which is solid all the way through. Crouched on my seat, I’ll practice my slurp, and when hot droplets of soup fly everywhere, nobody will get spattered but me. But to be honest, I don't really care as long as I get to enjoy my bowl of comforting noodles from Ukokkei Japan by Menzo at SM North Edsa. 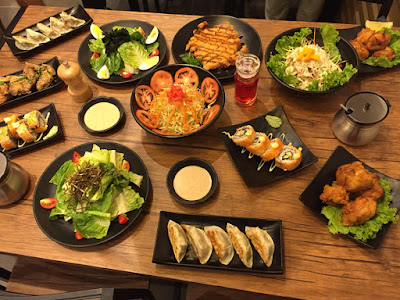 If you aren't a fan of noodles, there are other dishes for you to try here at Ukokkei Japan by Menzo. Try their gyoza, rice toppings such as Beef Yakiniku Don, Tori Karaage Cha-han, and Teriyaki Chasu Don. For those who are health-conscious, you may try their salads: Kani and Green Salads in huge bowls that are good for sharing.

The noodles was fresh and great consistency and I had to thank Ukokkei by Menzo for serving me an excellent delicious meal. I would happily come back again in a second. For palate cleansing and to cap off your meal, you may order any of their two desserts namely: Coffee jelly with vanilla ice cream and their Matcha Ice cream (I'm giving it two thumbs up!). The latter is a must-order. Don't leave Ukokkei without trying it.

Wash down your noodles or rice bowls with a choice of their signature red/lemon iced tea or green tea. The green tea can also be served hot.

And get this: Dine-in today, December 7, 2018 (Friday) at dinner time at Ukokkei Japan by Menzo at their newly opened SM North Edsa branch which is located at the third floor (in between Mesa and Pancake House), and get 20% discount! This promo is good until Saturday December 8, 2018. So what are you waiting for? Head over to Ukokkei Japan by Menzo and slurp your way to authentic Japanese yet affordable ramen.

Ukokkei Japan by Menzo is located at the 3rd level of SM North Edsa Main Building (between Mesa and Pancake House).

Disclaimer: I am not compensated for this post. Opinions expressed are 100% my own. Prices published are subject to change without prior notice.