Living or working in the CBD area definitely has its perks. I’ve always liked Bonifacio Global City (BGC), because it has everything a restless individual needs, and that is ample distraction. From fast-paced corporate power-jobs to the night-outs that come immediately after, spent at the myriad of venues serving a variety of food, culture and entertainment options that ultimately serve one purpose—to kill time. Now, there’s another reason for me to frequent BGC because of the newly opened Fat Fook Restaurant at The Globe Tower.

Strategically located at The Globe Tower on 32nd Street, Fat Fook is from the same group that has brought us the popular cult ramen called Ramen Nagi. This is the company’s fifth branch of the fast-growing Taiwanese chain. I’ve always wanted to visit Taiwan mainly because of its food and while I still do not have the budget for such travel adventures, a visit to Fat Fook will suffice for now.

I won’t go much into details, because I believe you guys had to visit and see for yourselves, but let me inform you that this Fat Fook branch in BGC has its own takeout counter which makes it more convenient for customers to order their favorite meals to-go. So if you’re a yuppie and working within the area and you’d want to have your fill of Taiwanese foods, you can always grab a bite at Fat Fook BGC.


The interiors are very similar to the four other branches that they’ve had. Porcelain china wares, well-lighted fixtures, chandeliers—name it, they probably all looked the same with some distinct variations. But they all evoke a feeling of being at home, while having that sense of foodie escape at the same time.

More than just impeccable service (they kept refilling my glass of H2o even without asking them to.) Fat Fook BGC brings in Taiwanese cuisine without the need to travel to the land of Formosa. A gastronomic experience at Fat Fook is enough to transport you to Taiwan. Now let me share with you some of the things you should try to eat (and those must-order foods) when dining at Fat Fook.

If you’re my Instagram follower, chances are, you must know how much crazy I’m into milk teas. So since it was my first time to try Fat Fook’s Taro milk tea, boy was I surprised to see that their milk teas come in a huge tub! I was drowning in both milk tea and joy as I gulp on it that night. The tapioca pearls used were chewy and it went well with the sweetness of the taro. If you’re like me, you’d definitely love Fat Fook’s tub of milk tea too just as I did!

Don’t judge yet. I know it takes an adventurous foodie to even try this dish. I’m not really fond of stinky tofu but I gave this dish a try. And you know what, I’m glad I did because it turned out to be not as bad as I thought it was. In fact, it was surprisingly good. Forget about its bad odor, (while eating this dish, you might want to imagine yourself as a participant on Fear Factor) but concentrate on its taste. The deep fried stinky tofu is best eaten when dipped in its sweet savory brown sauce with the pickled side veggies. Doing so would give your palate some exercise and textures: sweet, umami, salty, and sour. This dish also offers some nice crunch. It’s definitely worth a try, trust me on this one. We were surprised that we had more servings of this dish more than I had expected.

It’s a very simple dish with soft tofu slices, century egg and topped with pork floss swimming on savory sweet brown sauce. I like this appetizer because it’s very light. But one has to be really good at using chopsticks in order to properly get some helping of this dish. This is such a perfect appetizer to start off your meal.

I got to try Fat Fook’s famous chicken chops and I even paired it with their Kiampong rice (brown sticky rice with krill (dried small shrimps) and this one pulled a fast one on me—I’ve been craving for it since. Others say it’s similar to that of Hot Star’s, but I’d say it has its own unique taste. Hot Star’s more on the sweeter side, Fat Fook’s Chicken Chops are more umami. But it remains tasty, juicy and crunchy. For those who like spicy stuff, a chicken chops spicy variant will soon be available along with the cheesy variant. Soon, you’ll have more options to enjoy your Fat Fook chicken chops the way you want it.

If there’s another dish I’d definitely be back for at Fat Fook’s it has to be their XLBs or xiao long baos. Regardless if it’s the truffle variant or the original pork classic, I love their broth. Period. I’ve eaten at other restaurants and Fat Fook’s XLB skin aren’t too thick or too thin. They’re perfectly just right the way I want them. Easier to use chopsticks without poking the broth to ooze out of the xlb. They’re very rich and flavorful. Definitely a must-try at Fat Fook’s. 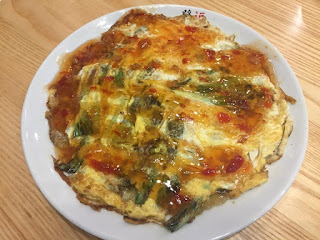 Fat Fook’s another house specialty is the Oyster Omelette. It has all the great flavors coming together in one awesome dish. Taiwanese wombok petchay, some sticky rice like the ones you see in tikoy and thick egg wrap drizzled in sweet and sour chili sauce on top. It’s another exercise on one’s palate as the mixture of textures bursts with all the exciting flavors play into your mouth upon every bite.

I’m a fan of noodles so when this dish was served on our table, I immediately took some helpings and indulged in it. I’d say it’s very light, but the noodles remain chewy and sweet as it’s coated in some savory and umami sauce. It may look like any ordinary pancit canton or noodles for you, but don't judge it based on its looks. Savor its taste to see the difference. The beef was fork-tender and the veggies were totally crisp. I really love this noodle dish. Fat Fook’s Taiwan Beef Noodles is enough for me to come more frequently to Fat Fook’s.

Among Fat Fook’s menu, I guess you must never leave Fat Fook’s without ordering this dish. Two Taiwan sausages on a single stick with two thin slices of raw garlic on each sausage. The garlic slices can be removed if you don’t feel like eating them but when you order this dish, I suggest you eat them as well because they go so well with the sausage. Don’t order this on your first date though unless you and your date agree to brush your teeth after eating them or you won’t mind kissing with garlic-breaths after. But kidding aside, this dish is a favorite in Taiwan street food and amongst Fat Fook loyal customers.

Here are other interesting foods you must-try on Fat Fook's menu:

Fat Fook lays its claim to a cozy and inviting dining experience that’s totally value-for-money—from its warmly lit interiors to the appetizing meals meticulously created by its executive chefs. For some dishes, they were tweak to suit the Filipino palate. I’ve always believe that the reason why Pinoys love Taiwanese food so much is that it is quite similar to ours.

A gastronomic experience awaits one at Fat Fook BGC. I assure you, you will be walking out and coming back to this restaurant with stars and hearts in your eyes.

You may visit Fat Fook at The Globe Tower, 32nd Street, Bonifacio Global City, Taguig. Operating hours is from 11Am-10PM, For updates and promos, follow them on their social media, on Instagram @FatFookManila and on Facebook (FatFookManila.)