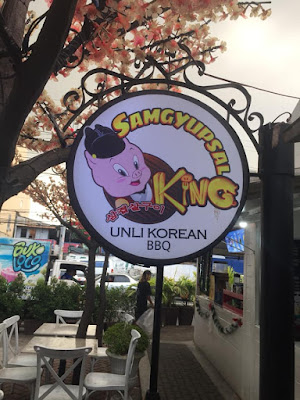 Grilling is enormously popular in Korean cuisine and these days, wherever you look in the metro, you'd seem to find a Korean Samgyupsal restaurant. I’m sure many of you have been to a smoke-filled Korean restaurant where you grill your meat at the table. Most of the Korean samgyupsal restaurants nowadays would usually use a portable gas grill or electric grill to cook at the table because it is more convenient.

My friend Rence recently invited me to try another samgyupsal restaurant called Samgyupsal King Unlimited Korean Barbecue, one of the tenants inside a French inspired posh-looking food park with a cool vibe along E. Rodriguez Sr. near Cordillera Street in Quezon City called Le Village Food Park. As a fan of Korean cuisine, I was excited to give this samgyupsal restaurant a try. Since the food park opens at 4PM, I decided to come early since I'm not that familiar with the place and it was my first time to visit.


I was surprised upon seeing Le Village because it looked very much similar to the one I've been to in downtown Cebu during my recent visit. The one in Cebu was a bit bigger and it's called La Vie Parisienne located in Gorordo Avenue in Lahug, Cebu. The only difference was that it wasn't exactly a food park like Le Village, but it does offer wine, pastry, and deli products. It also had a wine cellar. Now, what they have here at Le Village is called La Petite Parisienne. As the name implies, it's a smaller version of the one I've been to Cebu City.

What's nice about Le Village Lifestyle Food Park is that they've got lots of options to choose from. Different cuisines all under one roof, or one venue. And it's such a cool place with equally cool vibe. Prices are definitely affordable too, not to mention reasonable and servings are usually good for sharing as it's meant to be enjoyed with the company of friends, family and special someone.

Before I could go on further and rave much about Le Village, let's get back to the main reason of my visit at Le Village--to try Samgyupsal King. My Korean friend says that in Korea, traditionally, grilling is done over wood charcoal (sootbul, 숯불), which is considered the best heat source for Korean grilling and used by many good Korean BBQ restaurants. But of course, for convenience, most people use portable gas grill and this is how Samgyupsal King does it.

So ever wonder what is it about samgyupsal that has made it a hit among Filipinos and produced such a cult following? First and foremost, we know pretty much that most Filipinos have been bitten by the K-Drama and K-Pop culture. I don't exactly mean that we got it from what we've been watching but we become curious. It isn't surprising that the next best thing would be embracing the Korean culture as well as its cuisine. Introducing a very simple yet popular grilled dish called samgyupsal (fresh pork belly), gui (grilled), is easy to become an absolute favorite among us.


The thick strips of pork belly at Samgyupsal King can be cooked in large pieces or in bite sizes, it's really up to you. The fresh meat is grilled without seasoning or marinating. You dip a piece in the sesame oil sauce and wrap it in a lettuce leaf with a dollop of ssamjang (the sauce made of doenjang, gochujang, sesame oil, onion, garlic, green onions, and optionally brown sugar used in samgyupsal), some soy sauce (optional) and a choice of kimchi or raw garlic to balance off the flavors. Simple enough?

Add the meat to the grill along with the garlic, chili peppers, and any other vegetables you are using. Grill over moderate heat until cooked through, flipping once. These grilled meats are so tasty that everyone loves it every time. The smooth balance of sweet and savory flavors is certainly palate pleasing! I think our group was able to consume four or five rounds of meat during our visit.
What makes Samgyupsal King different from all the other restaurants that offer the same dish? First off, their price was so affordable. At P399, you get an unlimited samgyupsal meal which includes unlimited servings of pork, chicken and beef. It also comes with an unlimited servings of lettuce and banchan (appetizers) such as egg omelet rolls, pickled radish and carrots, potato marbles, and kimchi. You also get an option to choose the unlimited meat without beef, for only P350. I mean, how can you go wrong with such unlimited samgyupsal meal at very affordable prices? All their meats are well marinated and are fork-tender so it was easier to cook on the hot plate grill. The experience of dining at Samgyupsal King had actually reminded me of how much fun it was to have a Korean barbecue dinner night.

The advantage of eating at Samgyupsa King woyld also be, aside from getting high quality meats (despite of the recent inflation, they were able to maintain their price), the taste of their meats have been consistent and great. Being situated in a food park such as Le Village, allows one for some good late night eats too at midnight because they usually close at around 2AM. I will say this is one of their advantages. And you seldom had to wait for your turn to be served. I once had the unfortunate experience of having to wait for three long hours to get my turn at the table in a popular samgyupsal restaurant which resulted from too much starving on my part. But here at Samgyupsal King, very seldom would you be asked to wait because they have enough chairs and grill plates as well as portable gas grill for you. Of course, during peak hours, there may be times that you might also be asked to wait, but not for three long hours just as I did in the popular samgyupsal resto I was referring to (not Samgyupsal King, of course!).

Here are their choices for banchan:

Typically, I'll order the combo beef or pork platter depending on what my friends and I are craving, as I feel it is the best bang for your buck here.  If you have a larger party, then you may want to consider adding more rice!  I personally enjoy the beef here the most, but the pork is also good quality so you cannot go wrong with either to be honest. The chicken meat is quite bland for my taste, but it can be quickly fixed with a dash of soy sauce. I still think it's better than have it too salty.


Service has always been good during my visits as the servers do a good job keeping track of your need for refills as you cook your meats on the grill. The servers were all very friendly and catered to our every need. We didn't have to lift a finger. What an experience! Definitely recommend coming here for a special occasion. We were definitely all happily stuffed at the end and had to walk around for a bit to digest all that delicious food.


But overall, Samgyupsal King is now my all-time favorite place to get Korean barbecue fix at this side of town! Definitely come here if you don't feel going all the way to Le Village and want some high quality Korean BBQ!

Samgyupsal King is located at the Le Village Lifestyle Food Park in E. Rodriguez Sr., near Cordillera Street, Quezon City. Follow them on Facebook for more updates and promos,
https://web.facebook.com/Samgyupsal-King-Unli-Korean-BBQ-360873624413867/