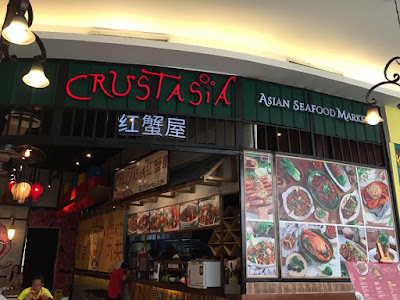 Crustasia Asian Seafood Market makes a great comeback. It is known as a restaurant that displays the same elements of refinement and delicacy through the concept of fine dining Asian cuisine and dedicated service. Crustasia, is a place that believes in combining great food, cozy ambiance, and impeccable service for a unique dining experience each and every time.

Crustasia Asian Seafood Market restaurant began as humble desire to serve good Asian cuisine by its resident chef and restaurateur Peter Ayson soon grew to be a reputable restaurant that sent food critics into an excited flurry. Chef Ayson's high standards for both himself and his staff allowed different Asian cuisines to penetrate the tough Filipino food market, ultimately establishing an Asian restaurant that would rival the dominant Asian cuisines. 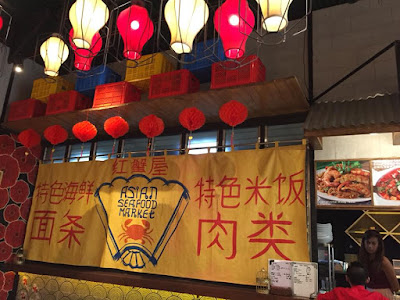 Though a flight to other nearby Asian countries might not exactly be in your travel itinerary in the future, it would be nice to check out the newly opened Crustasia Asian Seafood Market restaurant at the 2nd floor of Newport Mall in Resorts World Manila, Pasay City. Trust us when we say that Crustasia will transport you to Asia's hidden eateries and night market with the kind of foods that they serve.

Yes folks, you don't need to travel far and wide to experience the awesome flavors of different Asian cuisines. Influences from Malay, Thai, Vietnamese, Singaporean and Indonesian foods as well as touches of Filipino are in abundance at Crustasia Asian Seafood Market restaurant.

My meal started via this very refreshing drink which I highly recommend to anyone who would visit this restaurant. Try their Kefir Lime Juice. It's a perfect drink for those who had just come from the terrible humidity outside the Newport Mall. I was informed by my good friend Rence that Kefir is called Cabuyao (where the place in Laguna was derived from). When asked where they got the Kefir leaves, Chef Peter Ayson said that he's had them at his garden. They were freshly picked each morning, so you can be assured of its freshness every single day. Even if you aren't a fan of lime, you'd be happy to order this drink.

As I sip on my Kefir Lime Juice, my companions had ordered this Cucumber Lemonade drink. It's a bit bland for my taste, but I think it's better than give this drink a not-so-natural aftertaste. So expect it not to be sweet, rather think of this drink as a natural cucumber drink because that's exactly how it tastes like.

We all fell in love with their version of Yam Pla Dook Foo or Crispy Catfish Salad. According to Chef Ayson, the catfish was carefully deep fried before it was flaked. Even if it had taken quite sometime before we were able to dig into the said salad, we were surprised to find out it was still as crispy as it was prior to serving. We were able to finish it off in something like 10 minutes! That's how good it was. It was so good that it can stand on its own, even without the dressing/dipping sauce.

I'm not necessarily a fan of Bagoong. But their Bagoong Rice was indeed good.  It has generous slices of mangoes, chopped onions, tomatoes, sliced egg omelet, crispy dried shrimps and marinated slices of pork with coriander leaves, The marinated pork was so tender and seasoned well. It could be one of their signature dishes--you won't even think of any dipping sauce with how tasty this dish was. The red eye chili are added for an extra kick. Its the kind of plate that's got everything else on it: sweet, salty, spice, umami and savory. Eating this dish feels like an exercise on your palate.


The Calamari Char Kway Teow are noodles with smoky flavor and is considered a national favorite of Malaysians and Singaporeans. It's the most epic dish among noodles. Big on flavors while contrasting on textures and that signature hint of charred smokiness, this is bold South East Asian food at Crustasia at its best!

If you want to go for skewers, their Chicken Satay is a must-order! With well-marinated chicken and punchy mix of spices, it's just so addicting! The satay is served with peanut like sauce, but even without it, the chicken satay can stand on its own.

I'm exactly into fish. But their Claypot Catfish in Vietnamese Fish Sauce is another reason for me to try eating fish. Made with lemon grass, chopped onions and basil leaves, it had no "fishy"after taste. It packs a punch of flavor. Best of all? It's good for sharing!

I've always been partial to Tom Yum. I liked the taste of galanggal leaves and lemon grass. The comforting warm soup is topped with fresh water shrimp, mussels and coriander leaves. It tastes just right, not too spicy. I could eat this for days and I won't mind at all.

Steamed grouper is one of the best tasting dishes that Crustasia can offer. The fish is truly fresh and not too salty. You could say they didn't use any MSG or monosodium glutamate (vetsin powder) on it because it still had its natural taste. It doesn't have any "fishy"after taste again. It was carefully seasoned with soy sauce with generous onion leeks and sliced ginger as toppings. The fish was huge and perfect for sharing.


We were told that the staff had some mistake of buying a different purple rice than what was instructed by Chef Ayson. But Chef Ayson, being the foodie that he truly was, he was able to whip up a dish and created something truly flavorful as this dish, despite the wrong ingredient purchased. The ripe mango slices married the purple rice in this coconut milk dish inspired dessert.

Guyabano tropical is like our halo-halo but with guyabano fruit ice cream. Topped with sweet corn kernels, beans, gelatin, melon--it's a fusion of exciting fruit flavors that is perfect to cap off your meal.

Ice Kacang is similar to our Pinoy Halo-halo but with some distinct variations.

My final verdict: Overall, I look forward to the say when I can return! I'd love to spend my upcoming birthday at Crustasia. Tasting their menu today was absolutely delicious--could not fault a morsel. The service was impeccable. The staff were incredible, funny, warm, welcoming, there when you needed, in the background for privacy, but there again in the blink of an eye. The talented staff serving tableside were entertaining and has an attention to details (I need not call them to refill my water etc.) Thank you so much for such a great experience at Crustasia Asian Seafood Market restaurant. Come and visit them at the 2nd floor of Newport Mall, Resorts World Manila, Pasay City.


Special thanks to Ms. Janice Manansala-Crisostomo and Chef Peter Ayson.