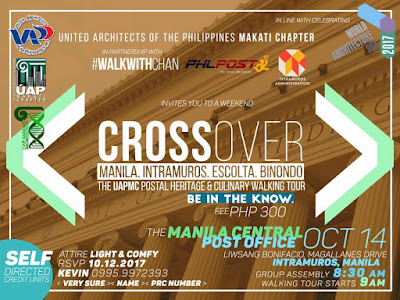 Finally. I was able to sit down and write so now I'd like to share with you my recent experience on rediscovering old Manila through the United Architects of the Philippines Makati Chapter in partnership with Walk With Chan and Philippine Post Office.

My apologies it had taken me quite sometime before i was able to come up with this blog post. Anyway, this Crossover Manila Walking tour was organized in celebration of the World Architecture Day last month. Through the kindness and invitation of my good friend, Rence Chan who has partnered with UAP-Makati for this Old Manila tour, we immediately said yes and were excited to revisit Intramuros, The Philippine Post Office, Escolta, and Binondo.

After years of merely passing by the facade of this glorious Philippine Post Office building, (I used to watch it from the safe distance in Plaza Lawton way back in college), the opportunity was finally ripe for us to explore its inner workings. Decades after decades of being overlooked, the iconic Philippine Post Office never really lost its grandeur. It somehow got the retrofitting it deserves. It was such a great experience to see that during out visit one of the gargoyles on the top of the building's columns were spouting water because there was a typhoon during our visit and it was raining. Too bad though, I only had with me my mobile camera, so i wasn't able to take a good shot of it. (You actually need a good DSLR camera for you to be able to capture its beauty). Nevertheless, the old Manila Post Office despite some of its paint peeling off and a few flooded areas, continue to stand amidst the rise of technology.

Even if the said building fades from its former architectural glory, it was a delight to know that contrary to what some people believe, it's not entirely an urban decay. People still do send tangible letters to their loved ones. In fact, the Philpost has also opened new services sch as Bayadcenter. Yes, you can now pay your bills by going to the Philpost. We were so lucky to be given a tour of the Philippine Post Office building. But since we had a very limited time due to the many itineraries that day, we had to do it really fast. One thing I had learned, Philpost is a story of Hope: as it embarks on a lot of restoration. It also captures the imagination of the younger generation, particularly the so-called millenials, most of them were not even born yet during its heyday.

We were also introduced to its rich history as well as its legacy. Ms. Arlene Labao, project officer for the Philately Collection and Museum Division was the one in-charge to tour us around. She also taught the milennials on how to write on postcards while Mr. Renaldo Ong, Philippine Philatelic Federation President also brought with him and showed us his rich stamp collections, some of them are really rare ones. He was also game enough to answer all the queries on stamp collecting.

With the said Walk with Chan tour, my nephew Kyle, with his infectious optimism said having seen the insides of the Philpost, he confessed that he has fallen in love with the structure. As for its stories, the two hours of touring it isn't enough to share with you both the eerie and the good parts of it.

The Glory of Escolta

After the Manila Post Office building, we went walking towards Escolta. According to Rence, Escolta used to be the commercial business district of Manila. Long before the Makati area became the area for the most successful establishments, Escolta used to be a posh place where commercial centers and businesses are located. This area also used to be home to the rich and famous.

The museum inside the First United Building houses some interesting collections as well as materials of the past. Perhaps some of which were used during Escolta's heyday as the business district of Manila.

For our next stop, we went inside the Calvo Building. This bulding also houses a mini museum of bottles and old newspapers as well as printed posters of old Filipino movies. According to Rence, this also used to be the first home of GMA 7. Yes, one of the country's largest network.

Since we were just a stone's throw away from Binondo or Chinatown, we had our lunch at another historical restaurant called Antigua Toho/Panciteria Toho or it's now known as the New Toho Food Center. It was established back in 1888. Yes, it claims to be the oldest restaurant in the Philippines. It was said that our national hero, Dr. Jose Rizal used to frequent this place ordering some of his favorites on the restaurant's menu. Imagine us enjoying the same delicious foods that Rizal and his peers used to enjoy a long time ago? Food is cheap yet delicious at some point.

The Beauty of Old Buildings

While waiting for the rain to stop pouring, we went up an old international bank within the area. It is now called as the Juan Luna Building. It's a great place to do OOTDs and shoot a music video. But more than that, how i wish it will be put to good use. I find it so "sayang." It had high ceilings and a great view of Manila skyline too. It had the view of Plaza Mexico to your right. However, it was refereshing to see an old HSBC building which had been converted into a cafe. It's now called as Grand Cafe. These are the types of buildings I only get to see on films and books. I wish they would be able to restore back to the beauty that the were.

We were then toured in the Walled City of Intramuros. I remember studying one semester here during college. But a lot of things have changed since then. We passed by the National Press Club office and then went to see the last surviving Spanish statues in Manila such as that of Queen Isabella II. She was the first person to be on the first ever issued Philippine stamp. Her statue used to be located in Plaza Lawton but eventually she was moved inside the walls of Intramuros. Plaza Isabel near Maestranza was named after her.


If there's a Queen present, a guy statue won't be left behind. There's also a statue of  a guy named Adolfo Lopez Mateos in Plaza Espana. It's a diminutive open space but you'll easily see the lone statue sitting at the center. It's a bronze statue made in honor of this Mexican politician and was former Mexican President. 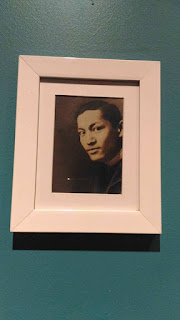 We were quite lucky as during our visit, there was an OPEN HOUSE in several attractions and museums inside the walled city. it meant to say, we need not pay a single cent because entrance fees were waived during this day. Some of those we were able to get into were Casa Manila Museum, Fort Santiago, Rizal Shrine and Baluarte De San Diego Gardens.

I'd like to thank the UAP-Makati chapter headed by its president, Mr. Miko Carandang for their warm invitation to join them on this tour. They were probably the most down-to-earth and coolest architects I've ever met. In fact, it was so easy to assume that they were simply students because they're still young-looking like most of them looked as if they were still fresh out of college. Whereas in reality, they're all professionals--working now in their respective offices as architects. But still, they found time to visit and see all the historical places we've just visited.


Overall, the said Crossover tour organized by the UAP-Makati was not only informative and educational on my part but also an eye opener. Although technology has indeed changed a lot of things in the society, still we must learn to value whatever it is that we have had in the past. These old historical buildings as well as those things that had some historical connections should not be put to waste, but must be given enough attention for our legacy to the younger generations. And just like my teenager nephew who went to accompany me during the said tour, it was refreshing to see all of these things as history unfolded before his very eyes. And in his young age, he saw that these aren't only seen through textbooks or old newpapers but it can still be enjoyed even in reality.

Here are details on some of the places we visited:


Special thanks to Rence Chan, United Architect of the Philippines-Makati, and Richie Ongteco.