CFL or LED? Know which light is the best for you.

If you want to change the world, start by changing a few light bulbs. It is one of the best things you can do for the environment—and your budget. According to the Union of Concerned Scientists, if every U.S. household replaced just one regular incandescent bulb with a compact fluorescent light  [CFL] bulb, it would prevent 90 billion pounds of greenhouse gas emissions from power plants, the equivalent of taking 7.5 million cars off the road. But you could also try using Light Emitting Diodes, better known as LED lights. Here's what makes both environment-friendly lights different from each other:

CFL also known as compact fluorescent is your mini version of a standard fluorescent light bulb.

CFL gives lighting efficiency and has been used for decades now and it has graced our homes as it fits perfectly in an ordinary socket without using an adaptor.

CFLs normally takes a few moments to warm up and reach its full brightness.

However, CFLs contain a small amount of mercury which normally does not cause any hazard but if the bulb breaks accidentally, that’s where the problem comes in. Mercury has been banned in the medical field due to its harmful effect on human health.

Regular CFL bulbs could last up to 6000 hours

Average energy use per year: 767 KWh/yr

LED or Light Emitting Diodes were introduced several years back with the promise of lowering your electric bill.

According to the study made by Lighting Research Center, LED light bulbs work by bringing together currents with a positive and negative charge to create energy released in the form of light. The result of this is a fast source of light that is reliable and instantaneous.

LED bulbs also fits an ordinary socket without the need of an adaptor and it bright up as soon as you switch it on.

LED bulbs is considered good for the environment and are endorsed by green movements.

LED bulbs generally cost more to buy although manufacturing technologies are lowering these prices as we move along.

Average energy use per year: 329 KWh/yr

Both serves your lighting needs efficiently. Both fits in sockets of your lamps and fixtures. Meaning, if you don’t consider the chances of your bulb breaking then you would likely choose CFL over LED because of the price difference.

CFL might cost less but it requires you to buy more bulbs over time whereas LED lights last longer, so even though you’re paying more at purchase, you buy fewer bulbs in the long run.

Considering the humid weather in the Philippines, we should also consider that CFL bulb emits more heat than LED bulb, thus, by choosing wisely, you can reduce the heat index in your home.

CD-R Kings makes it easier for you to decide

CD-R King, your one-stop media provider gives you the ease of choosing by taking away the drawback of the price difference by making LED bulb available to the General public at a more affordable price.

This is effort compliments their advocacy in encouraging people to care for the environment during their California e-bike campaign early this year.

It is also noted that CD-R King offers several choices of LED bulbs with different price range both for personal and industrial use.

Below are some of the choices for regular household use. 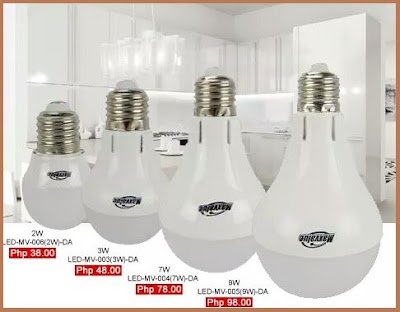 For other variants, you may visit CD-R king branches or check out their website at www.cdrking.com.
Posted by Vance M. Ramos at 6:20 PM