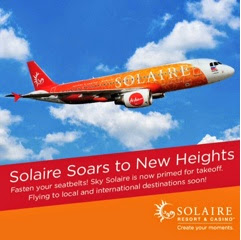 The Philippines' premier world-class resort, Solaire Resort and Casino recently partnered with another well-known and trusted company, Air Asia. Set to launch is a breakthrough project in the country where Solaire collaborates with Air Asia via its popular Airbus A320, which is scheduled to embark on its first ever flight this month of July. This is a momentous event as Solaire is the first-ever consumer brand to fully wrap and brand a commercial airline, with an underlying thrust of further promoting the Philippine tourism and in the whole of Asia.
Solaire and Air Asia's collaboration is indeed a huge step towards providing modern travel and leisure experiences for its customers, with a fresh approach towards their target market. The said partnership will surely facilitate more passenger and cargo traffic in both regional and domestic flights, at the same time will foster stronger trade, cultural and tourism ties within greater parts of Asia.
“This milestone is a key undertaking between two passionate brands with entrepreneurial and dynamic mindsets. This unprecedented branding project in the Philippines may be taken as a "leadership statement," which attests to Solaire's strong growth momentum in the industry. Yes we are again raising the bar; this time we're taking it to the skies.” says Donato Almeda, Board Director of Solaire Resort and Casino. 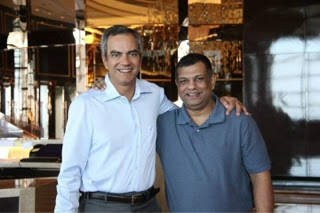 Photo Caption: Solaire Owner Mr. Enrique Razon Jr. and Air Asia Global CEO Mr. Tony Fernandes
Currently, Solaire’s brand colors are donned by just one airplane, but nothing is stopping them from further rolling out this innovative wrap on additional aircrafts in the future with broader partnership arrangements.  The campaign will continue until 2016 and it is envisioned that this high-impact ad in the sky will generate more hype and publicity as the partnership progresses.
Jasper Evangelista, Vice President of Brand & Marketing, Solaire Resort and Casino said, “This aircraft-branding campaign is a strategic branding initiative which would allow us to literally take our brand to greater heights. We have created amazing moments for our customers since Solaire launched last year, and now we’re aiming to further connect with our local & foreign guests and travellers by reinforcing our brand presence in the country’s airports. Sky Solaire will enable us to get immediate traction on this effort and even take it to a level all its own.”
Solaire has launched their “Create Your Moments" campaign, which highlights Solaire as the perfect place to create unforgettable memories, this fitting partnership with AirAsia, one of Asia’s leading and multi-awarded airlines in their category, harmoniously evokes the key thrusts of customer service, hospitality, and excitement for both their industries.  This marketing initiative is also primed to open up new revenue streams for both the integrated resort and the airline carrier.
AirAsia Philippines Chairman Maan Hontiveros said, “AirAsia Philippines is a sociable and innovative brand. We also take pride on our collaborative nature. This new livery demonstrates our creative approach to partnerships and marketing opportunities especially with companies that support our vision to grow tourism. We are thrilled to carry Solaire’s brand in the sky and on the grounds at the airports here and abroad extending to as far as our destinations in Malaysia, China and Korea.”
Posted by Vance M. Ramos at 3:06 PM