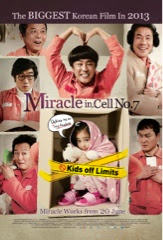 I'm a self-confessed film buff although lately I no longer had the time to actually sit down, relax and enjoy a good film. So I had to resort to the next best thing--which is to watch via youtube videos. I recently watched Miracle on Cell No.7, Korean film released in 2013 which has earned a lot of positive feedbacks from Netizens on most Social Media platforms. In fact, I came across Miracle on Cell No. 7 only after two of my friends had posted on their wall that they are watching the said film. And because it was highly recommended by my friends, I got curious with it and decided to see the film myself.
Miracle on Cell No. 7 is a wonderfully comical yet a touching story between a mentally ill father and her smart and lovingly adorable daughter. The father was accused of murder and rape but he's really innocent. This film reminds me a bit of the Hollywood movie entitled "I Am Sam" which starred Sean Penn and former child star Dakota Fanning. Both films had the same theme--the strong bond between the father and his daughter, they also had the same "mentally ill" Dad as the lead character who is incapable of being a Dad/fit as a father.  Although in "I Am Sam", Sean Penn's character is more mentally retardate. Here, in Miracle on Cell No. 7, the lead character is actually a doting father to her daughter. 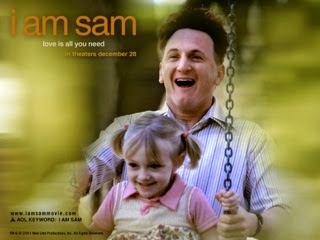 At the onset of the film, it has clearly established the love between the father and daughter. They were seen singing Sailor Moon's jingle (a popular Japanese cartoon in the 90's) together, they even had funny antics each time they bid each other farewell. For someone who never had the chance to experience such wonderful experience to bond with her Dad, watching the film's "happy moments" will surely be enough to tug your heart. 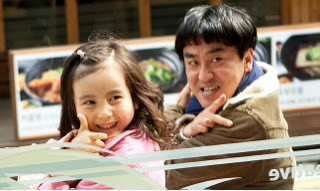 There were a lot of funny moments in this film especially when the father met his fellow inmates in the prison--on cell number 7. Throughout the film, the father has proven how good his heart was. He had saved his fellow prisoner from another prisoner's hands and even the chief prison guard from an outrage which resulted to fire. You'll feel empathy when you see him yearn for his only daughter. I'd like to commend the actor who played Dad and the child who played his daughter because they were both very good. They had played true to their characters well. Watching them together during their movie highlights or special moments together will definitely touch your hearts. 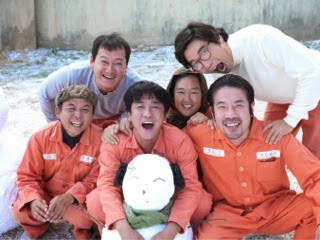 I had really been affected by the love between the father and daughter in the film. I don't know if it had something to do with what me and my beloved Mom had recently been through. I almost lost my Mom in an accident we've had last summer and having experienced that somehow had given me a more clear perception that life is really precious. We should say "I love you" more often and show how much our loved ones meant for us. We never know, one minute you could be with them and in a nanosecond, they or you could be gone. I've learned to value time, to spend as much time with your loved ones as you possibly can. Life is merely just that--enjoy it while you can. Savor and relish the moments you create for all of these will simply be part of our memories one day. 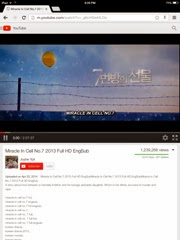 And just like my friends, I definitely give Miracle on Cell No. 7 two-thumbs up! I would recommend this film to every family. Make sure your kids will be able to see this film so that they would understand how blessed they are to have parents like you. The film's ending may not be a happy one as I expected it to be--but at least, the daughter and her father's former inmates and friends had something to be happy about.
I no longer wonder why the film Miracle on Cell No. 7 created waves and positive reviews throughout the Internet. It tackles on family relationship between a parent and a child--it is something that anyone can easily relate to. Quoting my former College Speech professor, Ms. Zenaida Rocamora, "Any significant human experience is worth sharing." To me, Miracle on Cell No. 7 is all that and more, thus I am sharing them to you now on my blog in the hope that you can find time to watch the said film on youtube or in videos and let the film touch your hearts the same way it did mine.
Disclaimer: I am not compensated for this post. Opinions expressed are 100% my own.
Posted by Vance M. Ramos at 3:19 PM