Measures taken worldwide to curb the spread of coronavirus or Covid-19 have seen numerous classical concerts and events postponed and cancelled, and concert halls around the world closed for indefinite periods since March 2020.

Countries banned gatherings, tightened their borders, and many have now seen various lockdowns for month. Some things are slowly starting to open up, but seeing live music still remains a rare treat.

As some of us are continuing to stay at home to work, self-isolate and look after the family, things may be slowly opening up and going live around the world, but we’re lucky that some classical concerts and events are being held in outdoors and streamed online for everyone to see—for free in many cases. It’s something that continues to bring comfort, solidarity and some beautiful relief in trying times…

And when I was given the opportunity to see the highly distinguished Philippine Philharmonic Orchestra [PPO] at the Cultural Center of the Philippines [CCP] concert right at the front lawn of the CCP grounds, I immediately said yes. After all, it was the first outdoor concert at the CCP Grounds and I wanted to be part of it.

Seats were on a first come, first served basis. And strict health and safety protocols were in place during the duration of the event. It was even livestreamed via the Cultural Center of the Philippines’ official Facebook page so that even those fans in the comfort of their homes can watch and enjoy the show and the group’s performances.

The world-renowned Philippine Philharmonic Orchestra [PPO] returns to the concert stage after almost two years of hiatus due to the pandemic with a free live concert for the public dubbed as “PPO CONCERT AT THE CCP GROUNDS” held last March 11, 2022, Friday, under the baton of conductor Herminigildo Ranera. It was the moment we have all been waiting for. The opportunity to be watching live shows again, sharing the joy and the power of great singing with a live audience and enjoying the gift of music as a whole.

The PPO has returned the stage with renewed variety and vitality and continued their commitment to present a diverse musical experience for its audiences. The concert started with classics from Franz von Suppe’s Light Calvary Overture followed by Orpheus in the Underworld by Jacques Offenbach. The PPO also gave a spotlight on the innovative work of Filipino composer Francisco Buencamino Sr.’ Pizzacato Caprice. Then they had also performed another classic in George Bizet’s Carmen Suite [Prelude, Aragonaise, Habanera and Les Toreadors.] It was then followed by the more popular “I Will Follow Him” first recorded in 1961 by Franck Pourcel as an instrumental titled “Chariot” but rose to popularity after it was used in the Whoopi Goldberg movie Sister Act in 1992. 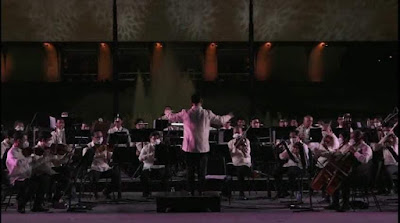 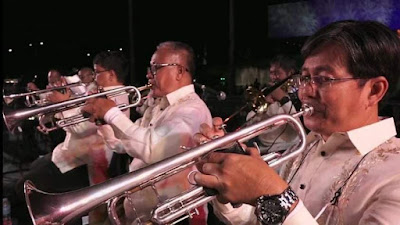 The powerful voices of the duo The Nightingales’ Bianca Lopez-Aguila and Rhina Palma-Cruz delighted the crowd during the intermission where they sang a medley of songs from different genre.

Part 2 of the concert were the music from the Broadway musical starting with Les Oiseaux Dans La Charmille from Jacques Offenbach’s Les Contes d’ Hoffmann. It is a magnificent soprano aria that not too many sopranos can successfully sing and perform. It is a difficult aria in the opera’s first act after Spalanzi, an inventor, creates his greatest invention yet: a mechanical doll named Olympia. The said French song was performed by soprano Lara Maigue during the show.

Such powerful performance by Maigue were followed by another superb performance from another guest, Mr. Bimbo Cerrudo who sang Andrew Lloyd Webber’s The Music of the Night and Till I Hear You Sing medley.

Another superb performance from husband and wife, Robert Sena and Isay Alvarez

It was indeed a magical evening with the country’s orchestra with esteemed Filipino artists Lara Maigue, Bo Cerrudo, Robert Sena, Isay Alvarez and the Nightingales.  The rest of the guests had performed a medley of Canseco, Cruz and Cayabyab’s OPM medley that had wowed the audience.

Once more, PPO had shown that an orchestra is not just mere for classical  and opera music but it can also play all kinds of music even the fast songs that we can all dance to.

Critic Sergei Bulanov wrote in Music Life: “A burning desire to make music, a sincere love for it, are the key qualities of any musician, without which genuine art is impossible. And the Philippine Philharmonic Orchestra does it again and again proves a shining example of this commonplace truth.” Their love and passion for making music together and to be able to share it to their audiences makes such evening a magical one.

The night ended with a strong applause of appreciation from the audience which continued even after some standing ovations. We'd like to thank the Cultural Center of the Philippines [CCP] for giving us this opportunity to watch the Philippine Philharmonic Orchestra to perform live for free--giving every Filipino a chance to see them and hear them (both online and in person), staying true to their goal of bringing music closer to every Filipino across the world.

Special thanks to Ms. Annie Alejo for helping us secure front row seats. My nephew Kyle, who's a music fan says it is indeed a memorable night for a youngster like him to see the PPO who performed live before his very eyes. Hoping for more PPO concert soon now that we have loosen our restrictions.