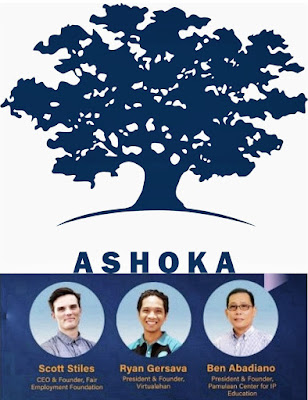 I have always looked up to people with noble professions and those who were naturally born with golden hearts--those who give a helping hand without asking for anything in return, those whose hands may be full but are still willing to help to the best of their ability for the benefit of our less fortunate brothers and sisters.
Growing up privileged, yet I had also volunteered to various NGOs, I myself had witnessed the simple acts of generosity and kindness from total strangers--and to be honest, these made me reflect. They inspire me to give myself more to others. As St. John Paul II said, "Nobody is so poor he has nothing to give, and nobody is so rich he has nothing to receive."
One of the many wisdom that Jesus has passed to us is that life is not, "I" or "me" but "we" and "us." Life is a community. It is wonderful to know one's place in the world and every single one of us needs each other. When I get to know people like our recently inducted Ashoka fellows and changemakers, namely Scott Stiles, Ben Abadiano, and Ryan Gervasa.
Ashoka is a non-governmental organization that aims to support leading social innovators around the globe. Recently, Ashoka officially inducted three outstanding and leading social innovators who have championed inclusive and systems-changing solutions in various Filipino communities. The virtual event was hosted by Ashoka Philippines to honor these "changemakers" as well as induct new lifelong members of Ashoka Fellowship program.
Founded in 1980, Ashoka has created a massive network of professionals that supports over 3,500 Ashoka Fellows from 93 countries. Now on their 40th year, Ashoka has built and nurtured the largest network of leading social innovators from across various sectors, professions and countries. After a stringent selection process, they are introduced to a lifelong Fellowship, where each member is committed to championing new patterns of social good.
The online event was led by Terri Jayme-Mora, Country Director for Ashoka Philippines who made the honor of inducting Scott Stiles, co-founder of Fair Employment Foundation, Ryan Gersava, co-founder of Virtualahan, Ben Abadiano, founder of Pamulaan Center of Indigenous People (IP) Education. The three exemplified what it means to make a resounding impact that benefits all Filipinos. Their respective organizations around the country go beyond limitations, socioeconomic status, and culture and thereby took down barriers and regressive systems.
"We are proud to welcome Scott, Ben, and Ryan into the global Ashoka Fellowship. Their transformative work extends to regions, sectors, and people that are unfortunately often overlooked despite having potential solutions for the good of everyone. They have what it takes to be a changemaker," says Ashoka Philippines Country Director Terri Jayme-Mora.

Ben Abadiano lived with the Manobo Tribe in Bukidnon and Mangyan Tribe in Oriental Mindoro where he put up a school for the Indigenous People (IP) called Tugdaan. It was his way to address the strong desire of the community of elders for a school that teaches the youth to value their culture and heritage. In 2006, Ben established the first-ever tertiary-level program for the indigenous people in the Philippines. Thus, the Pamulaan Center for Indigenous Peoples Education was born. The alumni of Pamulaan's 4-year degree courses are now youth leaders working in IP communities, development organizations, government, and as teachers, community facilitators, agriculturists, anthropologists, and trainers in the private sector.
It was such a big leap for our IPs to be able to have college alumnae thru the help and efforts exerted by the Pamulaan Center lead by Abadiano. Abadiano helped the youngster of the Mangyans and Manobo tribe how it is to dream big and continue to reach for it. He had shown them that poverty isn't a hindrance to success. If you work very hard for something, nothing is impossible to a willing mind.  While most are unable to go to school because they are not able to sustain themselves financially, their parents are unable to give them sufficient food, clothes, shelter and on top of it expenses for studies. The Pamulaan Center has proven that existing strengthening programs and initiatives can give others a chance to pursue their dreams and be able to give better livelihood.


I have been aware of a group called Virtualahan. The first time I stumbled upon it was on Facebook. As someone who is considered also PWD (persons with disability) [read: I have diabetic retinopathy on my right eye.], the programs on Virtualahan is very helpful for people like me. For those not familiar with Virtualahan, it is a pioneering and globally awarded virtual school for PWDs, solo parents, out of school youth etc. to develop skills and mindset and to become competitive employees and entrepreneurs utilizing the power of technology. Virtualahan led by Gersava equips people with practical and essential skills to become economically independent and competitive. Through proper holistic training, they are then able to earn at the comforts of their own home with high-paying digital jobs. The support system Virtualahan provides and their integration towards life-coaching to our curriculum with a strong focus on well-being, career guidance, leadership development, community-based therapy, and restoring human dignity makes the learning more eﬀective and positively impact their overall wellbeing and quality of life.

"We have it in us, the power to create positive change, the ability to turn our impossible around. I hope that my journey could serve as an example that everyone can be a changemaker," says Ryan Gervasa, one of the three inductees. The youngest Ashoka Fellow from the Philippines, Ryan was diagnosed with Hepatitis B which left him barred from having access to his dream job. As a result, Gervasa co-founded Virtualahan, an enterprise that uses cost-effective and transferable social technology that allows socially excluded populations to access work in the global digit economy, with focus on holistic coaching and education. In 2019, 78% of Virtualahan alumni, reported an increase in their self-confidence, 98 % felt a strong sense of belonging, 84% learned to become self-sufficient, and an astounding 92% owes Virtualahan for helping them accept their condition.


A huge percentage of migrant domestic workers, mostly women, in different parts of the world suffer abuse from the hands of their employers. The experienced of our OFWs (overseas Filipino workers) are no longer humane. Majority of those being maltreated and abused are women-OFWs. It is sad but true. OFWs risk maltreatment, physical and sexual abuse, even death just so they can provide for their families back home.

We need to put a stop to this and make sure that their right to decent work is protected. It is indeed good news to hear when an NGO does everything to make sure that OFWs are well protected and safe as they undergo training before taking on a foreign job. This is where we can laud Scott Stiles' Fair Employment Foundation.

Scott Stiles opened the Fair Employment Foundation back in 2014 to address the harsh conditions migrant domestic workers across Asia are being subjected to. With a mission to build and test ethical recruitment agencies and training center models, they seek to make exploitative recruitment unprofitable. Stiles, alongside his co-founders, built Fair Employment Foundation to shift the current model to a more fair and holistic one that greatly benefits the domestic migrant worker and their families in the long term. Scott intends to make Fair Employment Model a blueprint for ethical and sustainable models for employment agencies and training centers across Asia.

In such a cruel and crazy world, it's nice to know that there are still people like these three: Ryan, Ben, and Scott who were born with kind hearts--who help those who feel powerless and who used their skills and leadership to thrive and drive change. Ashoka envisions and works for an "Everyone is a Changemaker" world where each of us has the confidence, freedom, and societal support to address any social problem.