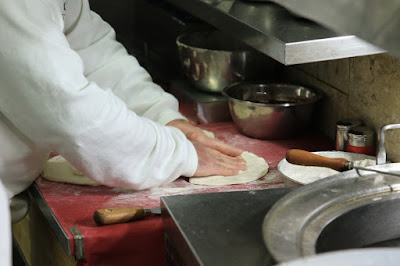 Pizza purists might not agree if I'd tell them that the owner of Tony Galvez Beauty Cafe came up with his very own pizza simply because he's never been satisfied with the ones commercially available in the market today. To be perfectly honest about it, I totally agree with Sir Tony. Nowadays, it's either you find pizza that may be considered as too greasy or they lack in flavor because most pizzerias scrimp on their ingredients. If you want a slice of the real stuff, you better make your own just like what exactly Sir Tony Galvez did. And luckily, Sir Tony takes his own version of the classic pizza with some interesting twists using the finest Filipino ingredients.

Pizza is very popular even in the Philippines. We have plenty of ''Philippinezed'' versions of pizza. Adobo being the most common staple viand in the country, it's no wonder why Sir Tony came up with it as his pizza topping. As I talked with Sir Tony, I thought of including kesong puti, a native fresh cheese from carabao's milk in his future pizza creations.  I won't be surprised if he'd come up with another pizza creation soon.

During dining, friendly mastermind-owner Sir Tony Galvez was all over the place. He works in the dining room, meandering from table-to-table chatting up delighted guests and divulging reasons why he came up with pizza, pasta, and pastries in his TG Beauty Cafe. It's pretty amazing that TG Beauty Cafe is revolutionary in the toppings arena. Its inventive ingredients set it apart from the pack.

How's the taste? If only there were no other eyes apart from mine, and no one will judge me for licking the entire plate what with the awesome pizza I was indulging in while being seated comfortably at their couch, I would've done it. The crust alone was just right--some soft parts while others have that irresistible crunch. The overload Hawaiian delight pizza (Php280) rocks while the chicken adobo delight pizza (Php380) had that undeniably Pinoy Adobo taste.

If you're able, I recommend you to stop by and have that slower-paced affair. Although you've got to keep in mind that there would be times when you need to battle the crowds during peak hours.

Keep in mind though that they are a relative newcomer in the pizza scene, so lower your expectations. But once you give it a try, they'll surely win you over with their elevated toppings. Before you go running, make sure you'll have enough space in your tummy because their pizza can be filling and you might want to grab a bite of their pastries and perhaps a cup of joe.

This isn't my first time at TG Beauty Cafe. I had even blogged about my very first visit five years ago.

Tony Galvez Beauty Cafe is located at the Tony Galvez Centrum, 9th Avenue, corner P. Tuazon Blvd. (near SM Cubao) Cubao, Quezon City. The TG Beauty Cafe is open from Mondays-Sundays from 10AM-10PM (on Sundays, they are only until 6PM).