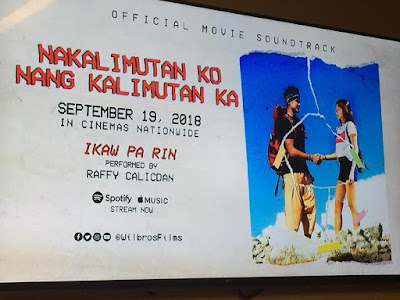 I vividly recall how devastated I was when I thought my world has crumbled after my narcissist ex has left me to get back together with his younger girlfriend in March of 2017. I have long moved on from that relationship as I am now happy dating someone else. But still, I can easily relate well with a movie like Nakalimutan Ko Nang Kalimutan Ka, a movie about a broken-hearted girl who can’t seem to get over her ex. Starring actress/TV host and book author Alex Gonzaga who plays the lead as Jaz Cruz, the said film tells the story of a distraught girl who couldn’t seem to get over her past love, portrayed by hunk actor Vin Abrenica.

Nakalimutan Ko Nang Kalimutan Ka is the first foray into films by Wilbros Films who’s known in the entertainment industry as concert producers and also the very first directorial job by former Pinoy Big Brother alumna, Fifth Solomon who also wrote the said film. Just like every broken hearted girl, everyone goes through that five phase towards complete healing and recovery.

In the film, Jaz’s seems to associate everything and anything with her ex. I had been through all such stuff too. The places I’ve been with my ex, the love songs I used to sing to him, his words still ringing into my ears—as in practically everything! In my case, I even tried shopping at H&M for a day and spent a whopping amount of P10,000 just to make myself feel happy. I had accepted three kinds of work at the same time (two writing gigs and as social media community manager) in order for me to get busy and hopefully easily forget. I also tried traveling. But in the end I realized that no matter where you are, your thoughts will always be with you. You must really have an outlet where you can express your sentiments and let it all out. Once you’ve cried everything and have accepted that it is where it ends, then it will be a lot easier for you to move on. And it is also important to surround yourself with all the people who love you genuinely like family and friends.

To give you an idea how heartbreaking this film is, check out the movie's teaser:

In the movie, Nakalimutan Ko Nang Kalimutan Ka, Jaz’s character was given the moral support she needs by her best friend (played by Jerald Napoles) and Doctor Rolex (portrayed by actress Candy Pangilinan) whom Jaz has asked for help to make her forget her ex easier.

Nakalimutan Ko Nang Kalimutan Ka is filled with bittersweet memories and “hugot” scenarios that we can all relate to. It promises to make you swoon, laugh, cry and practically grieve with Jaz’s character as she goes along with her many memories.

For more information, please follow @WilbrosFilms on social media and use the hashtag #NakalimutanKoNa