Eiga Sai 2017 at the Shang Cineplex

Shangri-la Plaza Mall once again hosts the Eiga Sai 2017 Japanese Film Festival. Now on its 20th year anniversary,  Eiga Sai carefully chose award-winning films that will take audiences through decades of Japanese cinema's different genres. There will be drama, comedy, animation, as well as suspense films. The Eiga Sai 2017 will kick off from July 7 to 16 at the Shang Cineplex Cinema 2.

The Anthem of the Heart

2015 | Animation, Drama, Children/Family | Rated PG | 119 min
An animated film about a young girl who loses her ability to speak because of a traumatic incident in her childhood. However, her outlook on life changes as she discovers the magic of music and friendship.

2016 | Drama | Rated R13 | 118 min
Produced by the Japan Foundation and the Tokyo International Film Festival, Asian Three-Fold Mirror 2016: Reflections is an omnibus film which brings together three acclaimed directors who each created a segment following the theme “Living Together in Asia.”
The Philippines’ Brillante Mendoza directs SHINIUMA Dead Horse, a film about an illegal Filipino immigrant in Japan who is deported back to the Philippines. Upon his return home, he discovers that his family has dispersed long ago and there’s no place for him to stay. Pigeon by Isao Yukisada focuses on an elderly Japanese man who is emotionally distant from his son and chooses to live in solitude on an estate in Malaysia, where he soon forms a bond with his new caretaker. Beyond the Bridge, set against the backdrop of the Cambodian civil war and the history of the Cambodia-Japan Friendship bridge, tells the love story between a Japanese architect and a Cambodian woman whom he ends up leaving behind.

IF CATS DISAPPEARED FROM THE WORLD

2016 | Feature | Rated PG | 102 min
The film depicts a postman diagnosed with a fatal brain tumor who strikes a deal with the devil to prolong his life in exchange for making things vanish from the world.

2016 | Comedy, Drama, Feature, Historical | Rated PG | 129 min
A comic tale where nine merchants try to use their with and wealth to save their town from poverty and the feudal lord’s harsh taxes without getting caught – or worse – executed.
Film Festivals, Awards: 2016 – Toronto International Film Festival, Opening Film, Japan Cuts, Camera Japan Festival.

IN THIS CORNER OF THE WORLD

2016 | Feature | Rated PG | 111 min (part 1), 103 min (part 2)
A wonderful story about friends brought together by their passion for the traditional Japanese card game of Karuta. Determined to be the best, Chihaya forms a competitive Karuta club with Taichi to prove that the game is more than just about old customs and to hopefully reunite with their estranged friend Arata.
Film Festivals, Awards: 2016 – Bucheon International Fantastic Film Festival, World Fantastic Blue, Fantasia International Film Festival.

2016 | Feature | Rated R13 | 125 min
Eikichi, the vocalist of a little-known death metal bad, has decided to marry his pregnant girlfriend, Yuka. He returns to his family home in Tobi Island after several years. However, his headstrong father, Osamu, collapses and is diagnosed with cancer.

WHAT A WONDERFUL FAMILY!

2015 | Feature | Rated PG | 120 min
Bakuman portrays the gifted illustrator Moritaka who used to be afraid of working to death much like his manga artist uncle, until he met the aspiring writer Akito. The two of them team up as manga artists to realize their dreams of writing for the biggest name in manga publications. 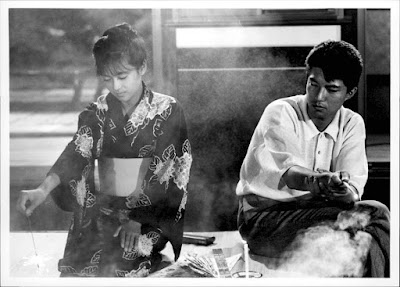 2016 | Feature | Rated R13 | 124 min
A bestselling author discovers the joys of living for others after his wife dies. After faking the part of a bereaved husband (he was cheating on his wife at the time of the accident), he meets Yoichi and his children who show him the genuine connections he hasn’t experienced before.
Film Festivals, Awards: 2016 Toronto International Film Festival, Special Presentations; 2016 Busan International Film Festival, A Window on Asian Cinema; 2016 Rome Film Fest. 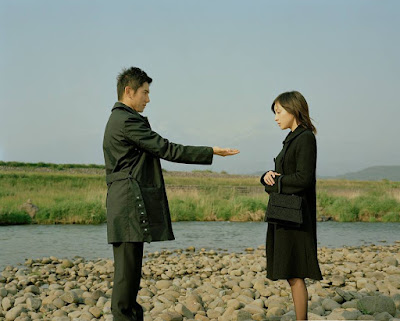 Tickets are at P100 at Shang Cineplex except on July 14, all the screenings are free of charge on a first come, first served basis. 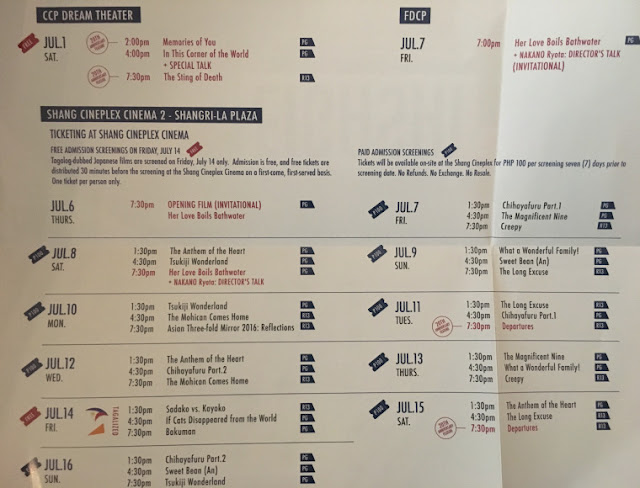 For inquiries, call 370-2597 or visit www.facebook.com/shangrilaplazaofficial.