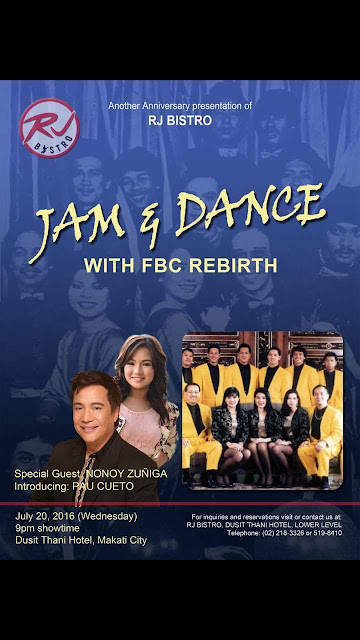 In celebration of RJ Bistro’s 30th anniversary, a special show will be held dubbed as Jam & Dance will be featuring FBC Rebirth Band with special guests OPM-hitmaker Nonoy Zuñiga and upcoming teen singer Pauline Cueto. Family Birth Control band (now known as FBC Rebirth band) was the group that has launched pop icon Nonoy Zuñiga’s career as a singer. It was the band that catapulted him to stardom. Unbeknownst to many, Nonoy was part of the original members of FBC band even before he lost his right limb during the Martial Law era. And for someone who’s been in the industry for years, it’s nice to know that Nonoy, despite going solo and gaining accolades on his own, he continues to jam with his old band whenever he has time. This is quite rare for such an amazing talent like Nonoy. No wonder, he’s one of the best OPM icons to date.

FBC Rebirth who happens to be the longest-running live band in the country to date, still had the grooves and shakes and continuously provides entertainment by playing disco music of the 80’s and other popular tunes from yesteryears that made them a household name some four decades ago.  FBC Rebirth members are lead vocalist Toots Almazan, vocalists Jiji Sanchez Ferdy Flores, Amor Laurico, Peachy Murillo, keyboardist Jess Balmaceda, drummer Sammy Villarin, bass guitarist Gee Carlos, Danny Trias on saxophone, Dex Ansay, Nilo Villanueva on trumpet and Edwin Valente on trombone. The band still dominates the night scene with well-loved disco songs that will surely rock the night away.

Jam & Dance will also serve as a reunion show for Nonoy Zuñiga with the FBC Rebirth. Happening on July 20th at the RJ Bistro, Dusit Thani Hotel in Makati City, It promises to be a night filled with fun, dancing, singing, and one memorable partying experience you’d definitely love. The show will start exactly at 8:30PM.
Also gracing the Jam & Dance Concert is fast rising young singer, Pauline “Pau” Cueto, 15. Young as she is, she has just released her self-titled album Pauline Cueto and it’s already out in the market and is now available on Spotify. She was part of TV5’s Born to be a Star. And you may check out her videos on Youtube with her first single “Dreamboy Ng Buhay Ko.”

Meanwhile, Nonoy Zuñiga himself has just released his digital single, “Sigaw Ng Puso” by Barney Borja, in digital formats iTunes, Spotify and Dezzeer. I have been privileged enough to get to know and interview Nonoy several years ago. If you would like to know more about him and my past interview, click here.