In each episode of MAN VS CHILD: CHEF SHOWDOWN, a team of five child cooking prodigies will challenge a prolific executive-level chef in the kitchen, where they will defend their culinary abilities. Will raw talent and imagination prove to be enough for the first generation of kids raised on cooking shows?

For the said launch, award-winning chef Sau Del Rosario whips up a mean risotto against Chef Estie Kung's own dish. Chef Estie's skills were put a test as she was pitted against Filipino chef Sau whose expertise is known all over the country. 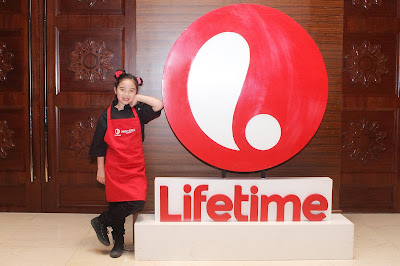 Brace youselves as great chefs will be put to the ultimate test, against the food stars of tomorrow. Each week, a new executive chef will face off against the team of minor masters. The competitors' overall aptitude and areas of expertise will be tested in three dynamic cooking rounds as they're challenged to create a different dish, under unusual circumstances.

Man vs. Child Premieres 26 January, Tuesdays at 7pm (SIN/HK) on Lifetime Channel
Posted by Vance M. Ramos at 4:01 AM