A CLOSER LOOK AT BULLYING 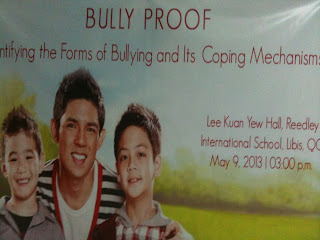 Bullying is the act of intimidating, harassing or dominating another person who is perceived by the bully as somebody weaker. It can be seen among children, adolescents and even adults in both communities and school.  When my nephew Kyle was in grade one, he came home on two occasions with his white polo shirt not only dirtied with mud but it also had a rubber shoe mark. He was apparently being bullied by a taller classmate who pushed him around. I told him that he should not be afraid of his classmate and to report immediately to his teacher each time intimidation starts. I stressed that he should not resort to violence like hitting back because physical aggression is not only prohibited in school, but it is also not an acceptable behavior and will fully worsen the situation.

An online article on GMA News reported that at least five out of 10 children in Grades 1-3, seven out of 10 in Grades 4-6, and six out of 10 in high school have experienced some kind of violence in school. Verbal abuse is the most prevalent form of violence experienced by children in all school levels. This includes being ridiculed and teased, being shouted at and being cursed or spoken to with harsh words. Children’s peers, more than the adults, are the perpetrators of violence in school. In our country, the sad news is that physical and verbal forms of violence are accepted by the children as part of discipline and seen as appropriate when inflicted within certain parameters. Family background and personal circumstances, influence of peers and media, lack of awareness about children’s rights, fear, inability of authority figures to respond to cases and lack of policies are some of the factors cited as contributing to incidences of violence in schools.
Bullying may damage one’s self-image, can lead to absenteeism, chronic depression, decline in functioning and in worse cases, even suicide. What is alarming is when children and even adults are being bullied in social networks end up their own lives. I sometimes wonder, as a parent, how can we protect our kids from these bullies? Assigning a school buddy for your child may be an option to lessen the chances of being bullied again. Having a teacher-mentor provides a ‘secure ‘base’ where the child can return to in times of distress or intimidation. Being always within the company of true friends also lessens the opportunity of the bully to pick on the victim. And I think apart from making your home bully-free, we need to find a more secure and safer place for our kids—we must find the right school.  After all, schools are supposed to be our kids’ home away from home. Finding the right school will actually give parents some sense of  ‘peace of mind’.
My good friend and contributor blog writer, Norma Galera recently attended a talk on Bullying organized by Reedley International School in order to raise awareness in fighting this global concern. Reedley has always been at the forefront of campaigns against bullying, and is one of the pioneers of anti-bullying school programs in the country. Through the years, the school has effectively launched activities through its annual Bully Proof program that promote a culture of kindness, belongingness, and camaraderie in school. In fact, Reedley’s anti-bullying campaigns were even used as a reference in drafting a house bill on anti-bullying policies for schools.

My contributor writer Norma only had good words for Reedley International School: “I guess what makes Reedley International School different from all the other schools I’ve been to was the fact that everybody treats everyone like family. While I was waiting at the reception area, there was a child who played with his toy.  One of the Reedley’s staff named Ms. Marissa had informed the child that his mother’s on her way to pick him up. I thought after saying such, she’d immediately go back to her workstation, but Ms. Marissa did more than that. She wanted to make sure that the kid was doing okay; she even asked if the child needs anything. I know that it wasn’t just a superficial thing. Even if I wasn’t there, Ms. Marissa will still be showing her concern over the child,” shares Norma. Genuine warmth is common at Reedley’s.

Reedley raises the students’ morale and self-esteem so that they show more initiative and greater disposition to learning. They have institutionalized a positive and challenging learning environment where children can participate actively, explore their interests and experience small and big successes because they believe that happy students are better learners.

Reedley International School also uses the latest and most effective academic programs. The teachers have been extensively trained in Kagan structures, which improves academic achievement, individual esteem through guided interaction. Dr. Spencer Kagan developed these structures through years of extensive research and is rooted in Brain Research and Cooperative Learning.  Reedley has also adopted Authentic Assessment, a grading system that allows them to go beyond measuring student learning and focus improving student achievement. For English and Social Sciences subjects, they have adopted the Ohio State Standards of Education. And for Mathematics, Reedley does Singapore Math. Teachers have undergone training with Singaporean consultants. They even have a Math Mastery program, an after school session that provides basic Math skills remedial for those skills that should have been mastered in the lower years.

Reedley empowers the students to manage healthy family and peer relationships and work effectively with less stress through their Life Skills Curriculum. Life Skills uses The 7 Habits of Highly Effective Teens and Happy Kids by Sean Covey as an anchor and guide. In addition to Reedley’s anti-bullying campaigns, the school integrates study skills, time management, and conflict resolution in its curriculum.
For more information, contact (02) 571-5191 or visit Reedley International School’s website by logging on to www.reedleyschool.com or email them at ris@reedleyschool.com
You could also find them on Facebook www.facebook.com/ReedleyInternationalSchoolPhilippines or follow them on Twitter @reedleyschool