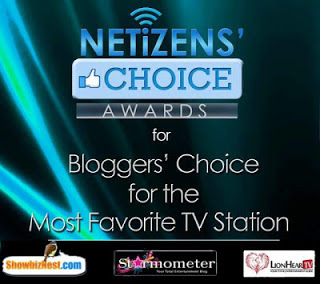 We all love to watch television. It's always been a favorite past time among Filipinos. Back then, I remember growing up with only five available channels: channels two, four,  seven, nine and thirteen. Life had been so easy with only five channels to live with. But time had tremendously changed...Life became more complicated and with so many television channels that we now have, being a couch potato isn't no longer as easy as it had always been. Add it to the fact that there are a whole lot of other things that not only entertain people but affecting their lives as well like the rise of blogs and the influence of social media. Cable channels have also become available, making television shows available 24/7.

My favorite TV channel may not be as popular as the two rival channels Two and Seven, but it is slowly making waves on its own. From ABC 5, it had become TV5--the Happy Network! TV5 had its own share of popular shows imitated but never duplicated such as Talentadong Pinoy with Ryan Agoncillo as its host. It had given birth to showcase world-class Filipino talents. And it's something that we can all be proud of. I've seen the likes of puppeteer WanLu rise to fame, witnessed how the young Joshua became the word-by-mouth Yoyo Tricker. Talentadong Pinoy is not only entertaining but educational as well. Each contestant also had their own stories to tell where the viewers can all relate to and learn from.

I also love TV5 because they had given back my favorite childhood show Batibot another life on the boob tube. For those who live in the boondocks or have only been born yesterday, Batibot was made by Philippine Children's Television Foundation--it's the Philippine's version of the more popular Sesame Street. Back in the 80's, I could still vividly recall myself singing to:


Pagmulat ng mata, laging nakatawa sa Batibot
Tayo ng magpunta tuklasin sa Batibot
Ang saya ang tuwa
Doon sa Batibot, tayo na tayo na
Mga bata sa Batibot maliksi masigla
Doon sa Batibot, tayo na tayo na
Mga bata sa Batibot, bata sa Batibot
maliksi, masigla
As a young child, I remember tuning in to Batibot to listen to stories told by Bodjie Pascua (a veteran stage actor) who was the best storyteller ever! He made all the stories worth listening complete with voice and facial expressions. It was really the BEST! He and Batibot made my childhood life more memorable. And with TV5 bringing it back on national television, the new generation will be given the chance to watch the kiddie show that their own parents had grown up to. Shows like Batibot is what the kids need nowadays, it is a lot better than watching cartoons. It's perfect for pre-schoolers.
TV5 also have The Amazing Race Philippines with no less than hunky Derek Ramsey as its host. The said show had wonderful trips to the Philippines where it has shown the beauty of our country including the Puerto Princesa Subterranean River--it's included in the new 7th wonder of the world. Let's all admit that not every Filipino has seen the country's 7,107 islands. We're all guilty of traveling to see other countries but I've never met someone who has traveled and seen most of our islands. It is really sad that most of us are quite "dayuhan sa sariling bayan"  (foreigner in our own country). TV programs such as The Amazing Race Philippines had given us a glimpse of what our country has to offer in terms of travel destination.
I also like TV5 because of Face to Face. This show is very transparent and I'm sure most viewers can either relate to the stories and topics that are presented because it shows real-life situations faced by individuals each day. The show helps (through the Trio Tagapayo) people in legal and spiritual aspects as well as guiding them how to move on with their lives.

And of course, Wil Time Big Time with Mr. Willie Revillame had given hopes and happiness to most Filipinos. I would cry each time a contestant tells his or her life story. And this is the only show in the world where a contestant can divulge his or her feelings/sentiments on air. Mr. Revillame handles the show very well. He delights the audience with his antics and he makes senior citizens feel special and loved. No wonder, they return his attention by showering him with gifts and hugs. My Mom is a huge fan of Mr. Revillame, it was just sad that she's never given the chance to watch his shows live or meet him in person. She's always been his fan...she was supposed to go to that tragic anniversary of Wowowee some years back---it was a good thing I had forbidden her to do so. But she's still hopeful that she will eventually have the chance to meet and watch Mr. Revillame's show and she also wants to have the jacket, sponsors' lootbags, the WilPhone that Mr. Revillame had been giving her fans and perhaps a photo of remembrance. She feels sad that she's always "overage" for the qualification of what the show had been looking for contestants.There have been talks that the show will be replaced with another one in another time slot--I'd say, it doesn't matter. Fans and those who love Mr. Revillame will stay glued to the TV  whatever time slot it may be. Rest assured, my Mom will be one of them.

TV5 also gave newbies a chance for stardom through Artista Academy. I followed through the show and was glad Sophie Albert and Vin Abrenica won in the end. Other networks may have a lot of talents but they all seemed to be "frozen delights", with no career or any other future plans because they have so many talents. With TV5, these two as well as the other finalists will surely have a spot on TV. With TV5 at the helm, their names will soon become a household word.

I am a proud Kapatid. It may not have the brightest star, but it shines on its own merits. Soon, like the Northern Star--it will be followed by everyone.

This project is made possible by - LionhearTV.net Starmometer.com and Showbiznest.com Let your voice be heard and vote for your favorite at http://lionheartv.net/2012/11/vote-bloggers-choice-for-their-favorite.html