Valiente Returns on Primetime at TV5 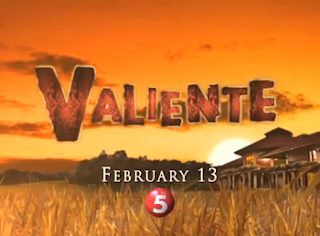 Valiente had been such a hit soap opera series in the early 90’s that even if it has moved from one network to another, followers of the said soap had been loyal to the said program that it lasted for five years.  I remember my relatives watching the soap while I was growing up, but I could not comprehend it then why they had been so glued on our television set each afternoon watching Valiente.
It was only during my college years at my television production class that I began to understand why Valiente had captivated millions of Filipino viewers.  It tells a story about how love, deceit, hatred and revenge affects friendship. The plot was simple yet many people can easily relate to it. But the scenes had been pretty complex that it can very well be compared to watching a full-length film on the silver screen.
On February 13, 2012, Valiente makes a grand comeback to once more win the hearts of Filipinos like me who grew up watching the series as well as to give chance to the new generation of viewers to see this classic story two decades after.
Now airing on primetime for the first time with no less than multi-awarded film and television director Joel Lamangan, TV5’s Valiente relives the epic tale of two families whose lives are intertwined by their desire to claim what they believe is rightfully theirs. The compelling story is given new life by a powerhouse cast lead by Oyo Sotto (Theo Braganza) in his first offbeat role, Nadine Samonte (Maila Braganza), Nina Jose (Leona Braganza) and JC De Vera (Gardo Valiente).

Joining the new generation of Valiente cast are some of the most respected and highly-acclaimed actors in the industry: Mark Gil, Jaclyn Jose, Gina Alajar and the original Valiente himself, Michael De Mesa.
Valiente also proudly presents an exceptional rendition of its original theme song as performed by its original singer, Vic Sotto. Highly acclaimed scriptwriter Gina Marissa Tagasa originally wrote the story of Valiente.
Personally speaking, I am excited to watch the new Valiente series, not only because I’ll be able to reminisce a lot of my childhood memories, but more so because I’d like to see how the production team was able to show the previous soap’s highlights in this new generation. We were informed that for this new Valiente, they used color-grading system. I used to work as a researcher for another TV network and I know that you do not use color-grading system in any ordinary show. Given the fact that Valiente had used that, I guess one can be assured that it is like watching a high definition movie on the boob tube; that’s how special the new version of Valiente is.
Here's a sneak preview of this promising soap opera soon to invade our television sets beginning February 13, 2012:
As we anticipate and welcome the new version of Valiente, prepare to be glued on your TV sets on primetime (to be aired after Wil Time, Big Time) as Valiente promises to be spicier, more exciting and more intense as the most successful teleserye premieres this February 13 on TV5.
For exclusive Valiente updates, be a fan on Facebook and follow them on Twitter.
Posted by Vance M. Ramos at 8:55 PM