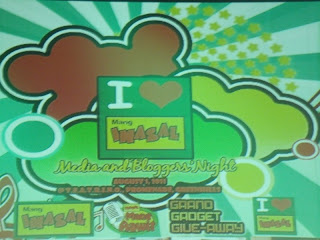 I still have a hangover from the fun I had with friends last night. Oops, don’t get me wrong though I didn’t drink any alcoholic beverage. So what do I mean by the hangover? Well, it was the happiness I felt with my fellow bloggers from Mang Inasal’s first ever Media and Blogger’s Night held last August 1,2011 at T.E.A.T.R.I.N.O. in Promenade, Greenhills.
Mang Inasal held this event to celebrate the launching of its newest campaign I <3 Mang Inasal, recalling how the company had started with really humble beginnings and how it had grown to be the brand that Filipinos had fallen inlove with and continues to move forward with bigger things ahead. On that night, Mang Inasal had launched two great reasons to love Mang Inasal even more: The Mang Aawit Project and the Grand Gadget Giveaway.
The Mang Aawit Project is Mang Inasal’s way of helping to revitalize the dying OPM scene in the country today. The project aims to preserve and enrich the local music scene by providing new and original songs that reflect Filipino sentiments, values and spirit. It also grants eight deserving artists from different genre the exposure to a wider audience; they include: OPM pop all-male dreamboats 1:43 whose debut recording titled “Time for Love” remains on the bestselling album charts for months now; multi-awarded RnB artist Arnee Hidalgo who is making her comeback album; acoustic singer-composer Aries Sales from Davao City; the hit pop band Kiss Jane; gold recording artist Myrus; stand-up comedian and radio host Onse of DZBB Teleradyo; sultry pop singer and Pinoy Dream Academy scholar Sheng Belmonte whose latest single “Gigil” is now a radio hit; and Sony Music’s acoustic diva Stephanie Dan.

“Mang Inasal loves Filipino culture and music, especially our very own OPM. We believe that promoting our own brand of music and artists is a part of our responsibility as a corporate citizen,” explains Mang Inasal Marketing Manger Enri Luzuriaga.
Mang Inasal Mang Aawit will be funding the recording of two promotional songs for every artist and the production of one music video that will be played heavily in the 400 and counting Mang Inasal stores nationwide.
During the Mang Inasal’s Media and Bloggers Night, the artists wowed us all as they performed live before the audience. Mang Inasal truly spread their love to media and blogger friends that night for aside from the free entertainment, games and flowing good food and drinks, two lucky guests walked away with a brand new ASUS Eee Pad Transformers in the raffle.
The Grand Gadget Giveaway is also an on-going store promotion which raffles off ASUS Eee pad Transformers and special I Love Mang Inasal USB Ballers everyday. To join, a customer simply has to purchase 250 pesos worth of products from Mang Inasal (any of its 400 branches) and they have a good chance to be a lucky winner for every day of the month of August.
Oh, by the way, Mang Inasal had just opened their 400th branch in V-Mall Carpark in Greenhills. Hope you guys can drop by and visit them soon! Now, I no longer just love Mang Inasal for their superb take on my favorite chicken inasal paired with sinigang soup and unlimited rice, I heart Mang Inasal more for people behind the brand—they’re one of the nicest people I know.

I may not have won in the raffle but given the fact that I had a blast with my fellow bloggers at the event, plus truly awesome performances by the breakthrough artists of Mang Aawit project—I couldn’t ask for anything more. I went home with a smile, satisfied with a wonderful night worth remembering.
Purple Plum Fairy thanks all the people behind Mang Inasal, fellow bloggers Richard Mamuyac and Shekina Aramenta.