COVID-19 has robbed many workers of their livelihood, and this is no less true in the performing arts sector, where live performances have been canceled to secure the health and safety of both audience and employees. With a number of freelance workers in the industry in urgent need, the most vulnerable of them displaced and deprived of the protection of the state due to the contractual nature of their work, Artists Welfare Project, Philstage, SPIT, Third World Improv, the Theater Actors Guild, and Ticket2Me created the online fundraising project Open House. With Open House, you can stream live online classes, shows, and workshops featuring some of the industry’s biggest names for FREE! But everyone is encouraged to donate suggested amounts in the form of tickets to simulate the tradition of live theater and help raise funds for the project. 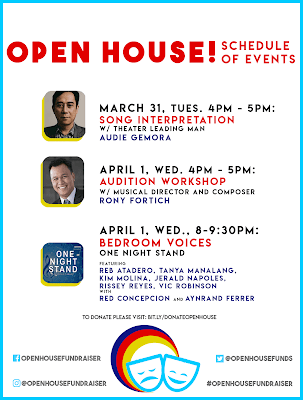 Viewers may click on to http://bit.ly/DonateOpenHouse to donate. All proceeds go directly to production workers like dressers, stage managers, lighting and sound technicians, stagehands, musicians, and more through the Artists Welfare Project. Every P2,000 donation to Open House will go a long way in supporting a displaced worker in the performing arts community and his or her family for one month during the Enhanced Community Quarantine.


Included in the all-female lineup for the launch of Philstage Roundatables is veteran stage actress, Menchu Lauchengco-Yulo

Check in with the Open House Facebook page for even more programs from April 2 to 8. Catch Lisa Macuja Elizalde’s ballet barre class, storytelling for kids with actresses Melody Remorca and Mikkie Bradshaw-Volante, SPIT’s COVID-Chismis show, Theater ATBP quiz night with Reb Atadero and Tanya Manalang, a voice class by Karla Gutierrez of the Philippine Opera Company, and the launch of Philstage Roundtables featuring an all- female lineup of theater directors: theater first lady Menchu Lauchengco – Yulo, Red Turnip Theater’s Jenny Jamora, Rak of Aegis director Maribel Legarda, Ateneo Blue Repertory’s Missy Maramara, and University of the Philippines’ Jose Estrella, as moderated by ANC’s Lexi Schulze. This will be followed by another Philstage roundtable, featuring sound designers Arvy Dimaculangan, Glendfford Malimban, Jethro Joaquin, Teresa Barrozo, and TJ Ramos, as moderated by actress and host Issa Litton. Ampalaya Monologues will also have a special program, along with Stephen Viñas conducting a theater jazz workshop. Closing the week will be the first TAG Live! presentation of the Virgin Labfest favorite “Ang Goldfish ni Prof. Dimaandal” starring award-winning actress Sherry Lara, Chrome Cosio, Peewee O’Hara, Mosang, Wenah Nagales, and Paolo O'Hara, as directed by Roobak Valle. A talkback will follow after the performance. The show must go on – without leaving anyone behind! Enjoy everything Open House has to offer at home, and lend your support to those who truly need it.

Donation opportunities may be undertaken anytime. Just click on the Ticket2Me link: https://bit.ly/DonateOpenHouse. For more information, go to FB: https://www.facebook.com/OpenHouseFundraiser