In this day of Samgyupsal hype, it’s so easy to understand why most Filipinos are into Korean food in as much as they’re also into anything Korean these days—be it K-Pop fashion or music or skincare and or soap operas. So when you come across a Japanese-Korean fusion restaurant, you’d surely want to try it out and see for yourself what’s there to discover. I stumbled upon Hodai Fusion Japanese Cuisine through the invitation of my fellow foodie and good friend, Rence Chan. It’s a Japanese-Korean fusion restaurant tucked within the residential area along Examiner Street in West Triangle, Quezon City. 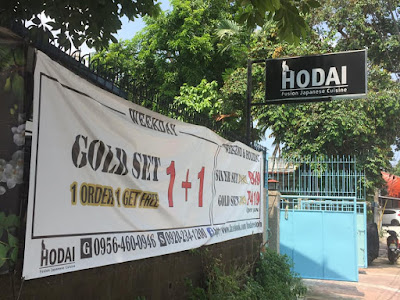 Interestingly, and increasingly, fusion restaurants are popping up all over the city. Their rooted dispositions like “a combination of global influence,” or a “mashup of food cultures” or “marrying the best of both cultures” immediately comes to mind with the mere mention of the word “fusion.”

The Tonkatsu, Teriyaki and Spicy Cheese barbecue bowl had nothing to do with any dreaded dryness is an outcome of Hodai’s chef fresh experimentations. This one-bowl magic happens when you stir them altogether, allowing the creamy cheese to soak up the meat in its sauce.

Yes, go ahead and stir it like a bibimbap. Simply diving in as it is doesn’t satisfy us as much as mixing it up. You’d love how the heated cheese served on a sizzling bowl seemed to reckon you to taste it. Imagine downing a chilled soda together with gyoza or Korean fried chicken—it’s these beautiful relationships that makes Hodai a place spot-on for a Friday or a Weekend family gathering.


Speaking of which, it’s inhumane not to succumb to their well-battered and deep fried shrimp Tempura’s crispy, not-so-greasy batter crunch. Especially when you dip them on its tempura sauce. Nonetheless, these crunchy shrimps are stand out on each unlimited food sets. Even on our own table with my friends, it’s the first ones that’s usually consumed once served on our table.


The Japchae or glass noodles are also worth mentioning. Unlike other Japchae noodles I’ve tried from other restaurants, it’s quite a relief on my part that Hodai’s version isn’t overpoweringly sweet. It just tastes right. No frills or anything, but it tastes just the way it should be.

Meanwhile, Hodai’s Rose Cream Spicy Vongole Pasta is also another food item that’s surprisingly on its meal set. The only downside is that it didn’t looked enticing enough for people to try. It’s easy to under estimate its taste. It’s made with white creamy sauce and with only four pieces of small black mussel shells as its garnish, it would make anyone judge its taste from the way it looks. But when you dig into it, you’d see it’s another must try. Served al dente, it actually tastes good with some kick from its spice. I wish it had some parsley perhaps to give it some color for it to become more enticing to eat. But you should give it a try, especially those who love pasta with some spice.

Hodai’s Korean Fried Chicken had lots of chopped nuts as toppings instead of sesame seeds. Kids will surely love its taste because unlike at Bonchon’s the flavors can still be savored from the meat all the way to its bones.

Oh and did I tell you they also have unlimited miso soup and complimentary hot tea that tasted like Barley? I loved their hot tea so much so that I had a second helping of it. It’s best to have it after your meal for easier digestion. For those with sweet tooth, you may order Korean ice cream brands like Melona separately [not included on their set meals] to cap off your meal.

While the dishes at Hodai’s are fairly segregated, the overall deep-flavors and saccharinity clearly suits the Filipino tastebuds. Please don’t expect to compare it with other fusion restaurants, because it’s a whole new universe out there at Hodai’s. Like what we say, it’s not just another Japanese-Korean fusion restaurant. You should try it and see for yourselves. One thing we can assure you though, at Hodai’s there will surely be something you’d fancy and it definitely gives you a true value for your money.

Hodai is having a promo until July 31, 2019. During weekdays [Mondays to Fridays] they are offering 50% discount on a 1+1 promo.  While on weekends [Saturdays and Sundays], they offer 30% discount. Silver set used to cost P499 but now until the end of the month, you can get it for P349 per pax on weekends. The gold set meals used to be P599 but is now at P419 per pax on weekends. 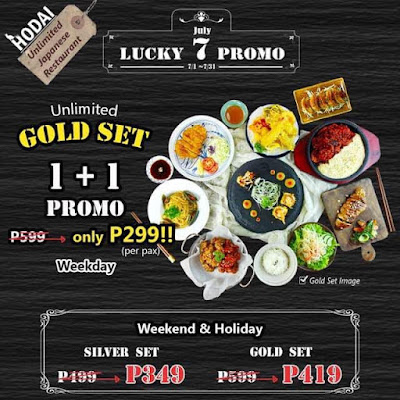 So hurry and catch the huge discount promos from Hodai! You surely won’t regret it!

Special thanks to Rence Chan and Ms. Sam Chung.

Disclaimer: I am not compensated for this post. Opinions are 100% my own.