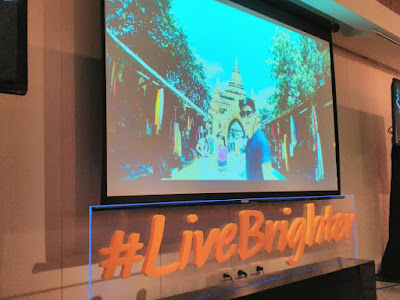 Time really kind of passed me by. I had never really thought much about my future. Don’t get me wrong, I do care about my future, but I guess I was the kind who liked to live taking one day at a time. But there really comes a point in time where you’d have some sort of an epiphany. And in my case, it has happened last week when I attended Sun Life Philippines’ #LiveBrighter session with one of the most sought-after inspirational speakers, Apprentice Asia Season 1 winner Mr. Jonathan Yabut.


The #LiveBrighter session was held at the artsy A Space Gallery in Legazpi Street, Makati City. To be perfectly honest, I had no idea who Mr. Yabut was, prior to his talk. But the minute the young man opened his mouth, I knew instantly he’s no ordinary guy. My focused got fixed on him as Mr. Yabut shared his journey towards success. He says that he’s just like everyone else—except that he took all the stumbles, obstacles and occasional curve balls that come his way as challenges for him to do his best, rather than hindrances. Mr. Yabut shared lessons from his experiences on The Apprentice Asia as well as bits and pieces of wisdom from his book called “From Grit to Great.” 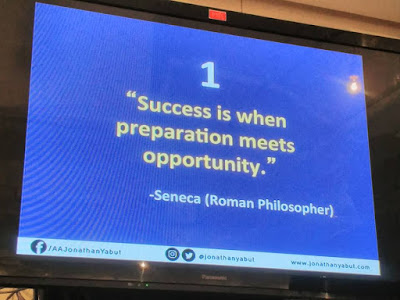 Allow me to share with you some of the things I had learned during the Sun Life #LiveBrighter Talk of Mr. Yabut:

1.   “Success is when preparation meets opportunity.” –Seneca
Yabut says you can never be too small to get big. If you want something so bad, you have to learn how to strike while the iron s hot. You also have to listen to your gut feel. If you don’t achieve anything on the next 5 years, then you are partly to blame. When predictable and unpredictable meets, that’s the opportunity you shouldn’t miss.
Yabut also discussed the important of Mise en Place. Much like the SOP for every chef working in the kitchen, you have to execute your actions at a right timing. For every 100 opportunities that come one’s way, you need to focus on just one big thing rather than go for the entire hundred half-heartedly. 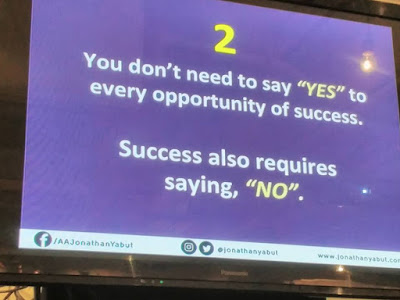 2.   “You don’t need to say “Yes” to every opportunity of success. Success also requires saying, “NO.”


According to Yabut, there’s an acumen of foresight. You have to zoom out first before zooming in. You have to see the bigger picture all the time. There are opportunities that we need to let go. Learn when to say ‘No.’ 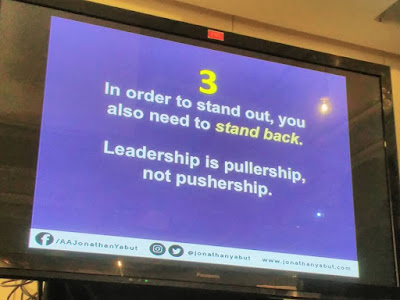 3.   “In order to stand out, you also need to stand back. Leadership is pullership, not pushership.” Steve Jobs once said, “I am proud of what we don’t do, as I am with what we do. Deciding what not to do is as important as deciding what to do.”
He also shared the lessons from the story of 1.4M Lettuce of Delta Airlines. In this life, we had some lettuce in our lives that we had to let go for they simply add up as burdens and stressors in our lives. They’re more as liability than assets. There maybe people or things in our lives that we had to let go. 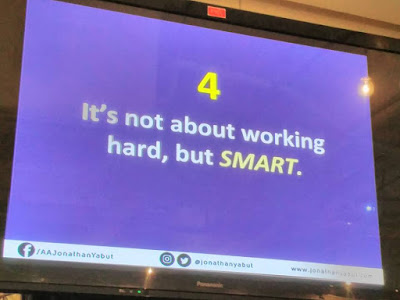 4.   “It’s not about working hard, but SMART. The secret to success is out there: it’s called, GRIT.” Yabut also talked about Carol Dweck’s “Growth Mindset Theory. For Growth mindset, They believe they can learn anything if they put their work, practice, and effort to learn it. Fixed mindset, however, think they cannot increase their skill and knowledge in a particular area. 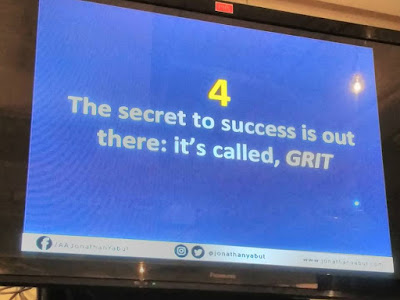 Grit is the secret recipe to one’s success. Success is used to be associated with one’s intelligent quotient, emotional quotient, beauty, fitness and wealth. But in reality, Grit as the secret to success is made up of passion and perseverance for very long-term goals.

Yabut ended his inspirational talk with Zig Ziglar’s “You don’t have to be great to start, but you have to start to be great.”

Yabut served as Chief of Staff for Air Asia for year after winning the Apprentice Asia hosted by Malaysian mogul Tony Fernandes. He now runs his own consultancy firm called JY Consultancy & Ventures, which operates in Manila, Kuala Lumpur and Singapore.

Sun Life’s Financial Advisor Mr. Juan Paulo Cruz, also spoke about his growth in his career and in his personal journey. He shared how he reached rock bottom both in financial status and love life. He emphasized the importance of a deeper reason for the wok one pursues. Cruz finds it fulfilling to help people achieve lifetime financial security. According to JP Cruz, “Failure happens not because you’re weak, but because your dreams are weak.” 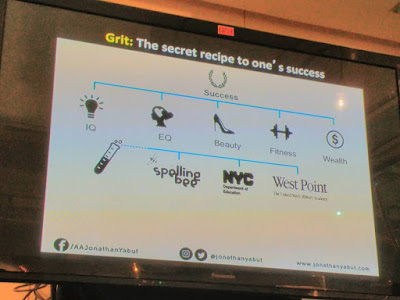 There’s so much inspiration to be had in Live Brighter Session. It was my first time to attend one and I’m glad I did because it had given me my purpose in life. It had given me further “ooomph” and motivation to propel me back to life, finding my real purpose in this life. That it’s never too late for me to pursue my dreams.

Being a Sun Life Advisor is a rewarding career. Your earning potential is limitless with time flexibility. It also gives one an opportunity to travel in exciting destinations. And it makes a positive difference in others’ lives by helping them fulfill their financial goals.

I’m so thankful to Sun Life Financial for holding Live Brighter Sessions such as these. This is a great way to reach out to a lot of millenials. I loved that these aren’t the hard sell kind, unlike other insurance and investments in the market today. What Sun Life Financial had shown is inspiring the youngsters of today to fulfill their goals in life, and opening them opportunities on how they can manage their finances in the best possible way thru the help of financial advisors.