Diana Stalder recently celebrated its 15th year Anniversary by coming up with a fashion show held last October 16, 2011 at the SM City Calamba in Laguna. Loyal customers, mall goers and fans alike where thrilled to have met two of Diana Stalder’s celebrity endorsers Ms. Yayo Aguila and upcoming teen heartthrob from GMA 7, Derick Monasterio.  There were even special production numbers and fun games for the audiences, with the program hosted by Yes Fm and Love Radio’s talented DJ’s Diego Bandido and Cheska San Diego.


As if that wasn’t enough, Diana Stalder also had an unbelievably amazing 15th year anniversary treats for clients and customers. With every P500 purchase of products and services, entitles a client to buy any soap, essences; personal care and foot care products for only P15 each. (Limited to 5 products of any kind per client) For spa goers like us, that’s really a great value for money! Imagine different kinds of soaps for your skin’s special needs such as kojic, whitening, anti-acne, licorice, fruit-scented soaps that used to be P135 and up, you can now get for a steal price of only P15 each? Foot care products such as foot lotion and foot scrubs are also for P15 each. Isn’t that enough reason to rush to the nearest Diana Stalder branch? You better believe it for it is Diana Stalder’s way of thanking its consumers and clients for a fruitful 15 years of existence. But better hurry up for the said promo’s only good while supplies last. Promo period is from October 1-31, 2011. 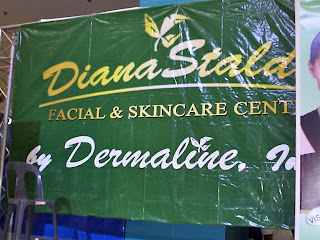 I had tried using Diana Stalder’s Clean and Tone lotion. It is a toning lotion that also cleanses, with its formulation of Allantoin and Salicylic Acid. It is especially formulated for oily skin, keeping my skin clean and fresh. I like it so much simply because it doesn’t leave my skin feeling too tight unlike other products I’ve previously tried. And I also love Diana Stalder’s Lemon Soap. It comes in a yellow packaging soap that smells so citrusy; it helps to cheer up my day each time I wash. It’s a cleansing soap specially formulated to cleanse and remove dirt and excess oil for a smoother skin. Other Diana Stalder products help protect from damages caused by free radicals and sun exposure, leaving your skin nourished and supple. They also have a line for those with really sensitive skin that are guaranteed hypoallergenic.

They say that the largest organ that we have is our skin. It is always exposed to a lot of different factors such as stress and pollution among others. When our skin sags and wrinkles, we tend to look older than our real age. And when you’re in your early thirties like me, it’s never too late to care for your skin. So we better give our skin the attention it rightfully deserves. It’s such a good thing that Diana Stalder’s products and services are made available.

The Purple Plum Fairy thanks Ms. Ia Adam Lim, Ms. Leila Balane of Diana Stalder, the very accommodating branch manager of Diana Stalder’s SM City Calamba (sorry I didn’t get your name).
Disclaimer: I am not compensated for this blog post. Opinions expressed are 100% my own.