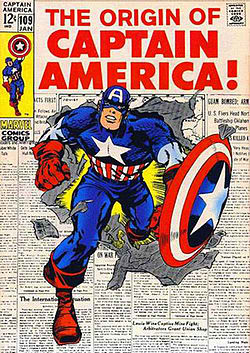 I admit not fully aware of Captain America or his very existence until my beloved Kyle came into my life. I had never been into Marvel Comics, much so into heroes regardless of their supernatural abilities and powers. But when Kyle came into my life, as a young boy, he was naturally drawn into them that I had to get to know them as well so as to understand what he's getting himself into. It's quite surprising for someone like me who hadn't really picked up any comic book aside from Archie's. However, in the process, I have learned a thing or two about these superheroes I used to only read about. I can't help it, Kyle loves to have it as topic for our discussion.
So, what do I know about Captain America now? Before becoming the villain-smashing, all-American superhero we know him today, Captain America a.k.a. Steve Rogers, was a would-be soldier who tried to enlist himself in the army. But because of his tiny frame and lithe body built, basically a frail body to begin with, poor Steve didn't make the cut! Awww! I'd have to say, that's totally harsh.
And things had changed when he meets General Phillips, who invites him to become a part of Operation: Rebirth. Operation rebirth is a U.S. government special project that creates a line of super soldiers, with super strength, speed, and agility, out of ordinary men. The General and his cohorts take Steve to their top secret underground laboratory, where Dr. Erskine injects him with the Super Serum--a combination of chemicals designed to give an ordinary man (yup, even stick-thin like him) an almost perfect battle-ready physique.
The serum had been successful into transforming Steve into Captain America. He's the world's first-ever super soldier and the U.S. government's most advanced battle weapon!
I personally don't have any particular Captain America favorite moment. But I'd like to share why Captain America is an anatomy of an all-american superhero for us. He's got relatively large-head to pack all that grey matter. Kyle and I both agree that in order to be a hero, one needs an extra brain power to know what to do during emergencies and learn to plan well for plots and disguises during battle strategies!
He's got humungous biceps. I think it's pretty important as the shield's prolly as heavy as a baby t-rex, so his cap needs muscle power to hurt it at foes. He also has hard-as-stone upper torso--when all else fails, Captain America can take down his enemies mano y mano. Plus he's got powerful legs. He's got thighs and calves as strong , there's no running away from him, that's for sure!
And best of all, Captain America's nemesis has got a face only a mother could love--that of Red Skull. He's the only man we know who can't do three stuff: wrinkle his nose (his nose is unique on its own), pout (he's got a different set of teeth or mouth) or blush (because he's already all-red).
Oh, and have I mentioned that Captain America helps us bond together as a family? You see, after getting to know who he is for sometime now, I did not realize that my mother knows him a whole lot better than I do. Captain America first came out in the early 40's and it used to be really popular during my mother's childhood years. Thus, her knowledge of our shield slinger super soldier was understandable. So each time Kyle had a certain question that I could not answer about Captain America, it is my mother who answer it for me. And it's fun, seeing three generations talking lively about a fictional character that turned into a superhero. It's nice to say that Captain America gels the three of us together tangled into a web of conversation (Kyle, Mom and I). I'd say Captain America is an inspiration for many, that nothing is truly impossible to a willing mind. Yes, there can be a hero in each of us, it's just a matter of showing bravery, with a dash of patriotism.
Captain America: The First Avenger will be shown in Philippine theaters starting July 27, 2011 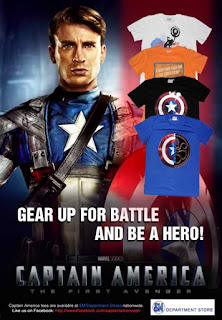 Email ThisBlogThis!Share to TwitterShare to FacebookShare to Pinterest
Labels: Captain America, The Avengers