When we're Faced with the Sad Realities About Life 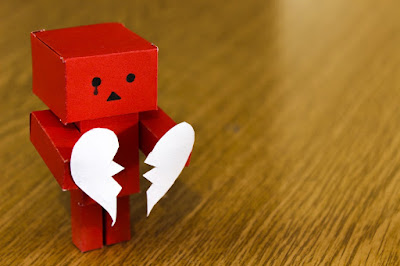 Note: I wrote this blog entry around two or three years ago after a friend confided in me that her marriage was on the brink of falling apart.

I feel sad each time I hear stories about couples drifting apart. Coming from a broken family myself, my heart goes out to all the children within the family as they will surely be the ones to suffer. But as they say, what good would it do for both parties no longer love each other or they would just be hurting one another? A long time friend recently parted ways with her husband of 12 years. Nobody said it was easy. After all, she had made her ex-husband her whole life in the past twelve years. A long time ago, my friend had set aside her own dreams to play the role of a young wife. She became a loving homemaker and a 24/7 mom to her children. Her children make her happy.  Although it all seemed that everything had been wonderful, her life wasn't exactly a bed of roses. But she had tried her very best to make their marriage last, to keep her family intact--in fact, she had given her whole to it--leaving nothing for herself--for her children's sake. Still, it ain't just enough.

Her children's father is no longer the man she fell in love with. He became insensitive even to the needs of his own children. Sure, he used to be a good provider, but never a good father to his children. He became a gaming addict--constantly online, he's so into it to the point of forgetting his own hygiene and would often engage in petulant quarrels with either his children or his wife resulting in domestic squabbles. She hated seeing him completely immersed into online gaming that he forgets his responsibilities to his own family. She no longer knew who this man had become. And just like that, one day, he decided to leave--with his wife not knowing what to do to survive. My friend is groping in the dark to look for clues on how to get her act together and be able to stand with her own feet to raise her kids on her own.

The sad part is that their youngest daughter has leukemia--and needs monthly treatment, chemotherapy, and other medicines. He knew how much his daughter needs money. The daughter's only five years old and she's fighting for her dear life. Too bad, the father does not even seem to even care for his youngest child.

When marriages fall apart and collapse, we need to spare our dear children. No matter how much the couples hate each other, they need to talk and iron out whatever kinks it is to be at least be civil with one another, just for the sake of the kids. After all, the two of you were happy making these kids, therefore they should be together in raising them as well.

Fast forward to 2017...Unfortunately, my friend is suffering from cancer herself. She is on stage 4. The good news is that her philandering husband has been a changed man now and is seriously taking good care of his wife and their family.

You see, the lesson here is clear. Sometimes we were given things in life which we had to go through in order for us to see life in a bigger picture. Things may not happen according to our plan, but when we allow God to lead us where we should go, things will eventually fall into their proper places. And it is the magic about life...because God has a plan for each of us. Before we were born, He knew what we will all become. We just have to simply follow His plans.

I pray that whatever it is that you are going through at this time, you will be able to see the positive side of it. I know it must be difficult for most of us, (yes, that includes me. I reckon I might be suffering from high-functioning depression) But know that there is someone you can call---God loves you more than you know. I don't intend to be a ray of sunshine here, or act like some holier-than-thou, but everything shall pass. And so does your problems. Behind the clouds, the sun still shines my friend, bear that in mind.